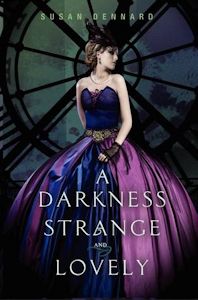 Darkness has come to the City of Light...

With her brother dead and her mother on the verge of insanity, Eleanor Fitt is utterly alone. Even the Spirit-Hunters—Joseph, Jie, and the handsome Daniel—have fled to Paris. So when Eleanor begins to hear the vicious barking of hounds and see images of haunting yellow eyes, she fears the worst—that the Dead, and the necromancer Marcus, are coming for her.

To escape and search out the Spirit-Hunters, Eleanor boards a steamer bound for France. There she meets Oliver, a young man who claims to have known her brother. Though friendly, Oliver entices Eleanor with necromancy and black magic, yet as long as she can resist his powerful temptation, she'll be fine. But when she arrives in Paris, she finds that the Dead have taken over the city...and there's a whole new evil lurking. With the body count rising, Eleanor is forced to make a deadly decision that will go against everything the Spirit-Hunters stand for.

In Paris, there's a price for this darkness strange and lovely...and it may have Eleanor paying with her life.

In this spellbinding sequel to Something Strange and Deadly, Susan Dennard delivers a thrilling mix of intrigue, romance, and revenge, all set against the wonderfully enchanting backdrop of nineteenth-century Paris.

This is the second full-length novel in the Something Strange and Deadly series.  The Spirit Hunters have left Philadelphia and Eleanor is thrust into a new life without anyone but herself to depend on.  So much has changed for her, and yet Eleanor proves herself to be as strong as ever as she faces it all alone.  There are some other new characters in this book, ones that I hope come back to play bigger roles in the next book.

While this was a good read, I didn’t absolutely love it as much as I had anticipated after the first book.  Some time has passed since the end of the first book and the beginning of this one.  A lot has happened in that time with Eleanor and her mother and that time clearly changed a lot for Eleanor.  I almost feel as if a lot of that time was a series of defining moments for her, moments that we as readers missed, missing some development and change to Eleanor’s character.

Because of that missing time, I felt like I didn’t really know Eleanor any more, at least not as well as in the first book.  So much about her has changed.  She is as headstrong as ever, which I love about her, but she is very different.  Her relationship with Ollie, a new character that was initially close to her brother, was a bit odd.  There were a lot of inferences and innuendos there that made you wonder about the nature of his relationship with her brother, but it was part of the mystery of his character that was never clearly explained.  He blew hot and cold with Eleanor, often seemingly expecting her to know things about the world of magic that she couldn’t possibly know, blaming her when she acted in ways he didn’t like.

This is a book about choices and being torn.  Ollie is from the world of her brother, who lived his life in ways that went against everything Eleanor believed in, that the Spirit Hunters believed in.  The Spirit Hunters viewed that world as dark and evil and eschewed everything that came from that side of magic.  Eleanor’s feelings for Daniel are as strong as ever, despite his rejection.  And the Daniel she sees again in Paris isn’t the Daniel she fell in love with.  It is a new world for her and one in which she is torn.

That conflict between who she is and who the Hunters want her to be is a big one.  I think that the Hunter’s reactions to her were a part of why this book lost a little of the glow for me.  There was so much self-righteousness on their parts, the feeling that their way was the only way.  While I understand their feelings, I hated that they refused to consider Eleanor’s reasons and the circumstances behind her choices.  They dismissed her without ever listening to her and that drove me insane!

All in all, this was a good read, despite a bit of disconnection with Eleanor.  It definitely moved the story forward and added so many new layers to the ongoing saga with the Dead!

« A Dawn Most Wicked
Strange and Ever After »