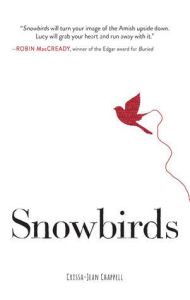 Every year, Lucy waits eagerly for the arrival of the “snowbirds,” the Old Order Amish who come trundling into Florida on buses from the north, bringing Lucy’s best friend Alice, with whom she’s spent every winter she can remember. This winter is different. At sixteen, Alice is in the middle of “Rumspringa,” a season in which Amish teens try out forbidden temptations, in order to get them out of their system. Lucy is part of a different sect, in which teens aren’t allowed such bold experimentation, and she’s fighting to keep up as Alice races from one wild party to the next. Then, one night after just such a party, Alice vanishes. Wracked by guilt, Lucy knows that she should have been watching out for Alice, but instead, she was kissing Faron, an Older Order boy shunned by his society. Now, Lucy plunges into a search for her best friend—while also hiding her own secret, which could put her in even more danger.

I grew up in Amish country in Northern New York, an area of both strict ordnungs more liberal Mennonites, so the topic of this book intrigued me the moment I read the back.  The story is mainly set in Pinecraft, a community in Florida that consists of both Amish and Mennonite residents.  “Snowbirds” are those Old Order Amish that come south for the winter, temporarily joining the Florida community.

The story is told by Lucy Zimmer, a young girl in the Mennonite community.  Unlike the Mennonite communities I am familiar with, her group embraces the long dresses and prayer caps of stricter groups.  But unlike the Amish, her dresses are pastel instead of dark blues and blacks.  Her community is allowed more mainstream living, including electricity, phones, cars, etc.  But unlike the Amish, they do not embrace rumspringa.

Lucy’s best friend is Alice, a member of the Old Order community.  She is in the middle of her rumspringa and that puts a bit of chasm between the two girls.  Alice is embracing the freedom of rumspringa and Lucy is left trying to keep up.  But after an argument, Lucy finds herself with a boy she should never be with, an Old Order boy who was shunned by his community.  To make matters worse, while Lucy is with Faron, Alice disappears.

This is such an interesting story.  On one hand, it is a bit of a coming-of-age story as Lucy struggles with her own ideology and dreams.  She has been struggling for a long time, caught between wanting a life outside of Pinecraft and the beliefs she has grown up with.  Her quest to find Alice teaches her so much about the outside world and about herself.  In the end, it has been an eye-opening experience that Lucy probably needed in order to find her place in the world.  On the other hand, the story is a mystery… what happened to Alice?  No one else seems to care besides Lucy and she is loyal and brave, determined to find answers, even if those answers may change how she looks at the world.

Crissa-Jean Chappell was born in Miami and now lives in Brooklyn, New York. Her debut young adult novel, TOTAL CONSTANT ORDER (HarperTeen) is a NYPL Book For The Teen Age and a VOYA Perfect Ten. Chappell’s second novel, NARC (Flux Books) is currently optioned for film. MORE THAN GOOD ENOUGH (Flux Books) is a Florida Book Awards medalist, which Kirkus calls, “compelling and emotionally nuanced.” Chappell’s newest YA novel is SNOWBIRDS (Merit Press, F+W Media, winter 2017). She holds a PhD and MFA from the University of Miami and has taught creative writing and cinema studies for over ten years. When she misses South Florida, she talks to the parrots in Prospect Park.