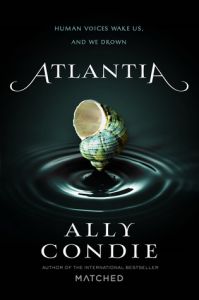 For as long as she can remember, Rio has dreamt of the sand and sky Above—of life beyond her underwater city of Atlantia. But in a single moment, all her plans for the future are thwarted when her twin sister, Bay, makes an unexpected decision, stranding Rio Below. Alone, ripped away from the last person who knew Rio’s true self—and the powerful siren voice she has long hidden—she has nothing left to lose.

Guided by a dangerous and unlikely mentor, Rio formulates a plan that leads to increasingly treacherous questions about her mother’s death, her own destiny, and the complex system constructed to govern the divide between land and sea. Her life and her city depend on Rio to listen to the voices of the past and to speak long-hidden truths.[/color-box]

Atlantia is a standalone novel by the author of the Matched series, which I loved.  This book, however, left me with mixed feelings.  The premise was amazing, but I just felt disconnected and I can’t quite figure out why.

The novel takes place in a dystopian world split between the Above and the Below, the land and the sea.  Pollution has ruined the Above so most of humanity has moved into an enclosed, underwater world.  Those left Above suffered with the effects of pollution so that those they loved could live Below, thus saving humanity from extinction.  Each year, on the anniversary of the Divide, children of a certain age are given a choice… stay Below or go Above.

After their mother’s death, Bay and Rio, twins, have promised each other they’d both stay Below.  Rio does this out of love because the only thing she’s ever wanted was to go Above.  But then Bay chooses Above, leaving Rio alone in the Below.  Rio is desperate to know why Bay broke her promise and finds answers she never expected.  There is a lot going on beneath the surface (no pun intended) of life in Atlantia and Rio begins to learn these secrets.

I think part of my problem connecting with Rio was the fact that her character just seemed too one-tracked in her emotional life.  It was as if she expended all of her emotion on her sister, leaving very little left for other personal interactions.  No big highs, no big lows.  It left her feeling a little bland as a character.  The world-building also left me disconnected.  While the premise of the world was fantastic, I just had a really hard time envisioning it.  It almost felt like we should already know what a world like that would be like.

I liked the book; I just didn’t love it.  And I really wanted to.

« Snowbirds
Ten Thousand Skies Above You »