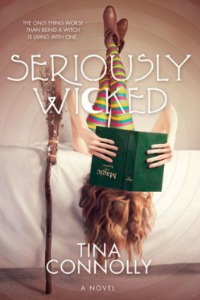 The only thing worse than being a witch is living with one.

Camellia’s adopted mother wants Cam to grow up to be just like her. Problem is, Mom’s a seriously wicked witch.

Cam’s used to stopping the witch’s crazy schemes for world domination. But when the witch summons a demon, he gets loose—and into Devon, the cute new boy at school.

Now Cam’s suddenly got bigger problems than passing Algebra. Her friends are getting zombiefied. Their dragon is tired of hiding in the RV garage. For being a shy boy-band boy, Devon is sure kissing a bunch of girls. And a phoenix hidden in the school is going to explode on the night of the Halloween Dance.

To stop the demon before he destroys Devon’s soul, Cam might have to try a spell of her own. But if she’s willing to work spells like the witch...will that mean she’s wicked too?

I ran across Seriously Wicked on the e-library site for my local Army library and fell in love with the cover.  But they didn’t own the book.  I recommended it, and the next in the series,  for purchase and, much to my delight, the library purchased both of them.

It is a quirky, quirky novel, which is something I appreciated!  Camellia Hendrix is not your normal 15 year old high school girl.  Instead, she is the apprentice/slave to Sarmine, whom she refers to only as “the witch.”  How she came to be under the control of Sarmine is sketchy at best and doesn’t help the already rocky relationship between the two.  To say that the witch is not maternal would be a vast understatement.  Her idea of punishment is to turn Cam’s hand into noodles, wrap her in vines, turn into a statue, and much worse.  Clearly a case for child protective services, but the witch insists the punishments teach lessons and are character-building.  Cam’s best friend is quirky in her own way, smart and accepting of Cam’s secrets.  And then there is Devon, whose character went through all kinds of mayhem.

The characters, even if you hated them, were interesting and well-developed.  Because the novel was fairly short, each one of the characters played a significant role in the story.  Kelvin, Jenah, even her teacher… each one of them was significant to the plot.  Cam’s character was fantastic, a strong female personality without any of the emo-angst I hate.  Instead, she met diversity with a smile and a quip.  She adapted to her circumstances and found a way to make the best of it.  I loved the fact that no matter how much she was oppressed, and she was, she still made it her mission to protect others.  And there were plenty of unexpected moments along the way.

The book is marketed as a YA novel, but although I enjoyed it, I felt like the tone of it was a probably bit younger than that.  Seriously Wicked is fun, light-hearted, and quirky read full of witches and magic. 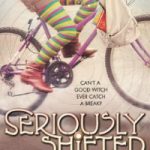