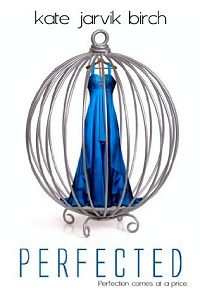 Perfection comes at a price.

As soon as the government passed legislation allowing humans to be genetically engineered and sold as pets, the rich and powerful rushed to own beautiful girls like Ella. Trained from birth to be graceful, demure, and above all, perfect, these “family companions” enter their masters’ homes prepared to live a life of idle luxury.

Ella is happy with her new role as playmate for a congressman’s bubbly young daughter, but she doesn’t expect Penn, the congressman’s handsome and rebellious son. He’s the only person who sees beyond the perfect exterior to the girl within. Falling for him goes against every rule she knows…and the freedom she finds with him is intoxicating.

But when Ella is kidnapped and thrust into the dark underworld lurking beneath her pampered life, she’s faced with an unthinkable choice. Because the only thing more dangerous than staying with Penn’s family is leaving…and if she’s unsuccessful, she’ll face a fate far worse than death.

For fans of Kiera Cass’ Selection series and Lauren DeStefano’s Chemical Garden series, Perfected is a chilling look at what it means to be human, and a stunning celebration of the power of love to set us free, wrapped in a glamorous—and dangerous—bow.

Wow.  Sometimes a single word can sum it up and “wow” does that.  Perfected is chilling, emotionally horrifying, and the implications are disturbing.  And I loved everything about it!

Ella has been genetically engineered to become the perfect showcase piece for the very wealthy.  She has been trained her entire life for this moment, the moment that some member of the elite would choose her to be theirs.  She is beautiful, trained in poise and grooming and subservience.  Her special gifts have been highly developed so that she may please her owners.  She is the perfect pet.

Perfected is set in a dystopian United States, although the the wealthy would argue that the world is their own utopia.  The wealthy live on gorgeous estates, while the rest of the world lives in poverty.  And this is where it gets scary.  In this world, it is entirely legal to own human pets, girls that are genetically engineered and trained to live their lives as the pampered pets of the very elite.

The vocabulary used to describe the world of these girls is dehumanizing, using terms that we normally reserve for animals.  The girls are raised in kennels all across the country.  The best kennel, the most sought after, is the Greenich kennel… Ella’s kennel.  The pets are raised in the kennels, spending their lives in training centers learning to be perfect showpieces.  They are raised to know that they are never going to be on the same level as their owners, nothing more than pretty pets whose only purpose is to please their owners.  When the time comes, they are sold by lottery to the very wealthy.  It is expected that their lives will be that of a pampered pet, sheltered and cared for… as long as they act as they should.  And if they don’t, there is always the red door at the kennel.  Once a pet goes through that door, they are never seen again.

When Ella is purchased, she is swept away to live in the home of a prominent congressman, his wife, and his son and daughter.  She is given a beautiful room and closet full of gowns.  On the surface, it is a beautiful life, an easy life.  But her life is not her own.  She is at the beck and call of her owners, with no right to thoughts and expectations of her own.  She is given a necklace with a beautiful diamond pendant and on the back was the engraved address and phone number of the congressman.  A dog tag, albeit a beautiful one.  At meals, she is never allowed at the same table, but at a table apart from the family.  It is assumed that she is unintelligent and it is perfectly accceptable to talk about her and treat her as if she were not a sentient being.

Ella was purchased to be the pet of Ruby, the congressman’s daughter who is a bit of an outcast, and it is fairly obvious that the congressman’s wife and son are not thrilled about her presence.  The two have different reasons for this, some of which have to do with a previous pet that apparently had something wrong with her and had been returned.  But despite the fact that she is intended to be Ruby’s, it is the congressman that has a creepy obsession with her.  It is that obsession that makes her realize that being a pet is not all that it is cracked up to be, that she is trapped.

It was appalling to read about the world of Ella, the dehumanizing ways in which she was treated.  It was horrifying to know that this was socially acceptable and legal.  The complete lack of humanity that was attributed to these girls was scary.  Even those that were against the practice didn’t always seem to understand just how unequipped these girls were to live any other way.  Every aspect of their lives had been about training to be the perfect pet.  No life skills, not even the basics of education.  I treat my dog Noelani with more respect than that which was afforded to these girls.

But there was beauty, too, in the romance between Penn (the son) and Ella.  He was the only own that saw her as anything more than a beautiful pet.  Even Ruby, who was sweet and kind, was young enough to not know any better and tended to see her only as a plaything.  But Penn saw her as a person with her own thoughts and feelings and dreams.  I have to wonder if Ella’s character is modeled a bit after Cinderella.

This is a book that makes you think about what it means to be human.  It makes you think about the line between morality and legality.  Just because something was socially acceptable doesn’t mean that it is right and that message is clear in this story.  It is also a story that makes you step back and look at effect of materialism on morality.  How important have material things become in this world that it is okay to create and own human beings as a measure of prestige?

I am a sucker for good, creepy dystopia that is a believable possibility.  This was one of those books and I thoroughly hope that there will be more to the story in the future!

Kate Jarvik Birch is a visual artist, author, playwright, daydreamer, and professional procrastinator. As a child, she wanted to grow up to be either a unicorn or mermaid. Luckily, being a writer turned out to be just as magical. Her essays and short stories have been published in literary journals including Indiana Review and Saint Ann’s Review. She lives in Salt Lake City, Utah with her husband and three kids.

« The Red Bishop
In the Zone »