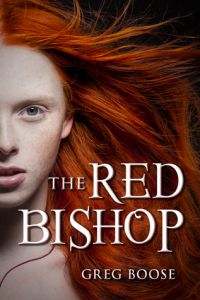 Sure, she and her friends are doing what many other high school kids do on Cape Cod: heading to Chatham Manor—nicknamed “Hell”—for a good scare. But for Lake, it's more than just a thrill-seeking game. It’s what keeps her alive.

Ever since her brother, Kimball, disappeared four years ago, Lake has needed the danger and the fear to feel anything but numb.

But on this night, “Hell” has more in store for Lake than she ever anticipated: A handsome stranger from the 17th century, a modern love triangle, a coven of witches, a hint that Kimball may still be alive… and the start to something that only she can finish.

The Red Bishop was such an interesting read.  Lake Price is the epitome of a slightly out of control teenage girl, and rightfully so.  Four years ago, her older brother was kidnapped from his bedroom and never seen again.  It has left Lake on a bit of an emotional rollercoaster.  On one hand, she is consumed with grief and sadness and fear for her brother Kimball, not quite able to admit that he may be dead.  On the other hand, she is numb, just completely emotionally numb to anything else.  As a result, she has become a thrillseeker, always overly intense and extreme.  She will essentially do anything to just feel.  She seeks out the scariest things she can, just trying to feel anything other than pain.  It is that need that leads Lake and her friends to a purportedly haunted house.  That one decision literally changes her entire life.

The mythology of this story is great, different from anything I have read before.  The story takes place in Massachusetts, bringing the rich, witchy history of the area into the story.  The witches in this story are positively frightening.  Their method of survival is disturbing and creepy at best.  There is definitely a bit more gore than the average YA novel, but not so much to be overdone.  Just enough to make it deliciously scary!!

There is time travel, magic, romance, mystery, betrayal, and a bit of an epic quest.  The cast of characters is just as diverse.  There was a twist with one of Lake’s friends that was rather unexpected, the twist completely not what I thought it was going to be.  There was even a love triangle, and I am not at all sure how I feel about it!

The ending left me a little confused.  I’m hoping it is a cliffhanger for another book in the future because I want to know MORE!

If you like a little horror/witchy mystery, this is a great read!

The fourth of six kids, Greg Boose grew up on a large produce farm in northeast Ohio. He received his undergraduate degree from Miami University, and then later received his M.F.A. at Minnesota State University Moorhead where he focused on screenwriting and fiction.

Greg is the former Los Angeles and Chicago Editor for BlackBook Magazine, and his work has appeared on/in many magazines and websites including Chicago Public Radio, The Believer, The Huffington Post, BlackBook Magazine, Time Out Chicago, Chicago Reader, NFL.com, McSweeney’s, and Cracked.com. When he’s not writing or reading, he enjoys skateboarding, boxing, tennis, following the Cleveland Browns and Cavaliers, collecting turtle skulls, and testing to see if people read everything closely.

He lives in Santa Monica with his two young daughters.

« One Wish Away
Perfected »