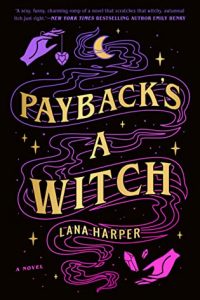 Chilling Adventures of Sabrina meets The L Word in this fresh, sizzling rom-com by Lana Harper.
Emmy Harlow is a witch but not a very powerful one—in part because she hasn't been home to the magical town of Thistle Grove in years. Her self-imposed exile has a lot to do with a complicated family history and a desire to forge her own way in the world, and only the very tiniest bit to do with Gareth Blackmoore, heir to the most powerful magical family in town and casual breaker of hearts and destroyer of dreams.
But when a spellcasting tournament that her family serves as arbiters for approaches, it turns out the pull of tradition (or the truly impressive parental guilt trip that comes with it) is strong enough to bring Emmy back. She's determined to do her familial duty; spend some quality time with her best friend, Linden Thorn; and get back to her real life in Chicago.
On her first night home, Emmy runs into Talia Avramov—an all-around badass adept in the darker magical arts—who is fresh off a bad breakup . . . with Gareth Blackmoore. Talia had let herself be charmed, only to discover that Gareth was also seeing Linden—unbeknownst to either of them. And now she and Linden want revenge. Only one question stands: Is Emmy in?
But most concerning of all: Why can't she stop thinking about the terrifyingly competent, devastatingly gorgeous, wickedly charming Talia Avramov?

I went into this book with high hopes, as I’d read and loved the Hibiscus Daughters duology by the author’s alter ego, Lana Popović. And I was definitely not disappointed!

The writing style is very smooth and beautiful to read, and the author’s attention to detail and description are on point without being too much. I was so easily able to envision the sights, sounds, and smells of the the magical town of Thistle Grove. I’m from northern New York, and I could easily imagine this town as anyone of the small towns near my own. The characters, too, were fantastic. It is told in the first person from the perspective of Emmy Harlow, but the other characters are just as well developed, which made me feel like I knew them as well as I did Emmy.

Books with witchcraft and magic can often be rather hit or miss for me. Sometimes it’s because the witchy parts are borderline absurd, sometimes it’s because there isn’t a good balance between the paranormal and the other aspects of the book. Neither thing was a cause for worry in this book. It was a lovely balance between the paranormal, the romance, and the rest of the book. And the witchiness was fun to read!

Pseudonym of YA novelist Lana Popović.