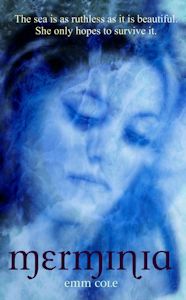 In an underwater world that is as beautiful as it is ruthless, the mertribes are not about to make peace with each other. Selinne is a mermaid who is certain she can take care of herself. But when she is captured by the bloodthirsty Litiants, she finds unlikely help from Gabriel, a warrior who appears as indifferent as he is handsome. As Selinne struggles to make sense of the good and evil around her, she discovers that there is no escaping love or her place in the raging war of the sea.

There is something about the word underneath the waves that is so alluring to me.  The salt water, the sand, the beauty of a world so deep that those of us with legs rarely get to experience it.  This book had all of that and so much more.

Merminia is the story of Selinne, a Merminian mermaid who is the sister of her tribe’s leader.  Their tribe is at odds with another, the Litiants, a rather bloodthirsty tribe on a quest for an object long lost to the undersea kingdoms.  Selinne finds herself in the middle of it, caught between two tribes and two loves.

The mythology of this undersea world is creative and inventive.  The differing tribes of mermaids have not only differing ideologies and traditions, but they are physically very different.  Some of the mermaids are portrayed in a more whimsical way (like Disney’s version of The Little Mermaid), others like the merpeople in Harry Potter, and others that are the warriors of the ocean.

Selinne is headstrong and powerful in her own right, but there are moments of “mermaidy” behavior (picking up a shiny piece of jewelry after a battle) that make her a more traditional mermaid.  Gabriel is a warrior, a member of the enemy Litiant tribe who walks into Selinne’s life at the worst possible moment and turns it on edge.  He is a bit cagey and conflicted and often a complete contraditction, which gives him a lot of depth as a character.  Aramis is a fellow Merminian and Selinne’s other potential love interest.  I am thoroughly on Team Aramis, although the triangle makes Selinne’s story.  He is completely devoted to Selinne, but he is not the self-pitying, stalking, or mopey kind of guy.  He is there for her no matter what and in any capacity he can be  I love him!

I loved the blend of new and traditional mythology to create an entirely new world!  A great read!

Emm Cole is the author of two fantasy YA books, Merminia and Keeping Merminia. She lives with her husband and two spunky children. When she’s not writing, she is often highlighting favorite passages in books.

According to Emm, authors Laini Taylor, Maggie Stiefvater, and John Green are pen-wielding super heroes. Don’t share your Sour Patch Kids or Swedish Fish with her, because she’ll eat them all. Emm is a fan of everything supernatural and finds that drama in stories is always more entertaining than the real kind. She also enjoys thought-provoking art and is an admitted TV series junkie who has The Vampire Diaries and Friday Night Lights memorized. If a pop culture reference wasn’t acknowledged on Gilmore Girls, she probably finds it irrelevant.

Although she will always have a love for her underwater characters and warring Mer clans, she’s currently writing for dysfunctional witches with a flair for magical theatrics.