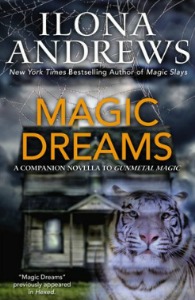 Alpha Pack leader Jim Shrapshire has always been the strong, silent type. But something has come over him--a magic force currently residing in one of the Pack's headquarters. Were-tigress Dali Harimau has always wished she could get Jim's attention--but now he needs her help.

Stricken with a magic-sickness, Jim needs Dali's flair for magic. And to save him, she must challenge a powerful, dark being to a battle of wits.

This is the novella I’ve been wanting!  The story of Dali and Jim.  It is something that was teased in one of the earlier novels, but I’ve been wanting this story.  It is the romance of two unlikely people and I loved it.

I have loved Dali from the moment we met her.  She is so quirky!  She’s a shifter, one of the most celebrated in the shifter world.  But she’s a vegan.  Yes, a vegan shifter.  And shifting isn’t easy for her.  And on top of that, she is practically blind.  She has self-esteem issues of the highest sort and compensates by drag racing, despite her eyesight.  I love her.  And then there’s Jim.  Usually surly, he’s the head of security for the King of the Beasts.  And, for once, he has to rely on someone else to help him.  Enter Dali.

The romance is sweet and rife with all those bizarre issues that exist in relationships.  And then if the romance is between shifters?  Well, things only get more complicated.

This is a great side story to the series.  They are two very different characters and their relationship is just one I rooted for. 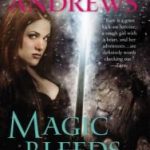 « Seriously Shifted
Off the Ice »