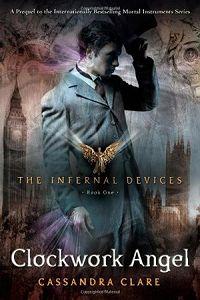 Magic is dangerous; but love is more dangerous still.

In a time when Shadowhunters are barely winning the fight against the forces of darkness, one battle will change the course of history forever. Welcome to the Infernal Devices trilogy, a stunning and dangerous prequel to the New York Times bestselling Mortal Instruments series.

The year is 1878. Tessa Gray descends into London's dark supernatural underworld in search of her missing brother. She soon discovers that her only allies are the demon-slaying Shadowhunters; including Will and Jem, the mysterious boys she is attracted to. Soon they find themselves up against the Pandemonium Club, a secret organization of vampires, demons, warlocks, and humans.

Equipped with a magical army of unstoppable clockwork creatures, the Club is out to rule the British Empire, and only Tessa and her allies can stop them....

The Shadowhunters of Victorian England are fighting a war against a group of rogue Downworlders that almost seems unwinnable.   Tessa is pulled into the world unepectedly, never dreaming that werewolves, vampires, and warlocks truly existed.  Her world is turned upside down when she finds out that nothing is as she thought, even herself and her brother Nate.

Althought Will and Jem are the ancestors of characters from the Mortal Instruments, there are traits about both of these characters that remind me of their descendents and I really appreciated that connection.  Magnus makes an appearance, whom I love, as does Camille… furthering the connection between the two series.

I honestly wasn’t sure how much I would like this book, for two reasons.  The first was that I loved the original series so much that I was afraid that this would maybe pale in comparison.  The second was that historical fiction just isn’t generally my cup of tea.  My husband, having finished this series before me, assured me that I would enjoy it.  In fact, this series is his favorite of the two.  I was very happy to discover that he was right.  I loved the characters and the story line so much.  It was engrossing and entertaining and it was historical fiction that was well done!

I love that the culture of the time is so seamlessly blended into the fantasy of the story.  It is a time when there were certain views on the social value and place of women and that is reflected even within the Shadowhunter world.  Charlotte is constantly challenged in her role as the head of the London Institute, simply because of her gender.  Tessa is amazed at the thought of women fighting and Jessamine, although of Shadowhunter blood, turns her back on much of it, preferring to live her life as mundane society dictates.  In addition to the blending of the social norms of the time was the steampunk element that is such a part of the time.  The inclusion of the clockwork Angel, among others, was at times both interesting and terrifying!

I read this after Mortal Instruments and I think that it actually enhanced this book for me.  I think the original series, even though it comes later chronologically, really creates the Shadowhunter world for the reader.  Great book!