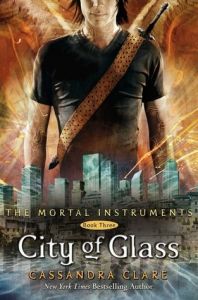 To save her mother's life, Clary must travel to the City of Glass, the ancestral home of the Shadowhunters - never mind that entering the city without permission is against the Law, and breaking the Law could mean death. To make things worse, she learns that Jace does not want her there, and Simon has been thrown in prison by the Shadowhunters, who are deeply suspicious of a vampire who can withstand sunlight.

As Clary uncovers more about her family's past, she finds an ally in mysterious Shadowhunter Sebastian. With Valentine mustering the full force of his power to destroy all Shadowhunters forever, their only chance to defeat him is to fight alongside their eternal enemies. But can Downworlders and Shadowhunters put aside their hatred to work together? While Jace realizes exactly how much he's willing to risk for Clary, can she harness her newfound powers to help save the Glass City - whatever the cost?

City of Glass is the third book in The Mortal Instruments series and it is my favorite thus far!  So much action, so much intrigue, so many twists and turns!

There are some new characters in this book, some of which have turned the story line of the series on end.  Bad guys, good guys… from page to page, there are times when you just don’t know about some of these characters.  Even those we known and love have their moments.  Nothing is black and white in this book, but a million shades in between.

There is a ton of emotion in this book, a ton of mystery and intrigue, a ton of battles and action.  I love the ongoing story of the series and the way it constantly changes!  Engrossing!!  This is a must read for fans of the series, my favorite yet! 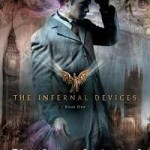