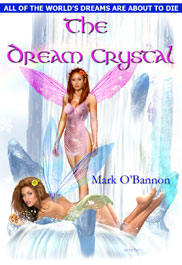 All of the world's dreams are about to die. The Shadow People have come. Always near, they linger in the darkness, ready to devour dreams, hopes, aspirations and desires. . .

isling, having lost her dream of becoming a fashion designer, learns that she's a Faerie changeling. Disquieted by the fact that her faerie parents are kidnappers, she has decided to rescue the human child she was exchanged for, but her "sister" is no longer among the faeries, having been taken by the Shadow People. Ith, the Lord of Shadows, is trying to control the dreams of mankind, which are under the protection of the faeries, so they're at war.

Aisling, who doesn't believe in dreams any longer, is falling in love with a handsome, mysterious stranger - one of the Shadow People.

The Dream Crystal is the first in the new series, The Dream Wars, by Mark O’Bannon.  The book opens with Aisling at a pivotal point in her life, having just lost her dream of becoming a fashion designer.  She has just days to move out of her family’s home after a lifetime of feeling as if she were an outsider.  After an incident that even she herself doesn’t understand, she is asked to leave her beloved Kung Fu temple.  And she is suddenly having visions of people in the shadows, watching her.  Things seem to be on a downward spiral when her best friend is whisked from her side and disappears.  Soon, Aisling and Genevieve are transported to a world that they never dreamed existed, the Land of Dreams.  When Aisling learns that she is a faery changeling, as many questions arise as are answered.

I really loved the premise of this book.  Changelings are generally dismissed by the “true” faeries of the land, as they tend to survive a very short time in the Land of Dreams.  Having lived mortal lives, many have lost their ability to truly dream and to believe in magic and they quickly fall into the shadows.   But is soon obvious that there is something different about Aisling as she is cast in the role of heroine.  The Land of Dreams is at war with the Land of Shadows, and Aisling is dropped in the middle of it.  Those living in the Land of Dreams believe that dreams fuel the magic but that too much pride will cause your downfall and send you into the shadows.  More and more faeries are falling to the shadows of Lord Ith and Queen Annan is trying to find a way to make that stop.  On the surface, it seems to be a classic “good vs. evil” tale.  But I loved that it wasn’t that simple.  There were times when it was just impossible to really know which side to root for!!  The story was also as much a reflection of Aisling’s journey to redefine herself and find her purpose in life as it is an epic fantasy tale.  She is a fabulous character and really draws you into the story.  Constantly cast into impossible situations, it was very easy to be right there next to her in the story.  She was made all the more believable because she didn’t always make the perfect choices in those situations.

The writing truly brought you into the story, a beautiful mix of reality and fantasy.  I loved the blend of Irish and Asian cultures as well.  My only complaint would be that there was almost too much fashion commentary.  While I understand that it tied in Aisling’s fashion design dreams, there were times that it stalled the flow of the book for me.  Every outfit was described in detail in every scene.  While those descriptions themselves were well-written and definately gave me a perfect image, it could get distracting.  After a bit, I tended to skim those parts before getting back to the meat of the story.  Otherwise, I loved the flow of the story.  It was action-packed and the gray areas between good and evil kept me turning the pages, wanting to know what would happen next.

The characters in this story were fantastic, both main and otherwise.  Genevieve, as a mortal, added a lot of humor to the story and I loved the interaction between her and Eileen, Aisling’s guardian.  Queen Annan was also an interesting character, one I never quite figured out.  I liked that the author created the characters to be entirely relatable as people, despite the fact that they were faeries.  Very often, fantasy characters may be perfectly likeable, but not relatable to mere mortals.  These characters were generally everyday people who just happened to be faeries.  That was very refreshing.

The cover is a pretty one, but it led me to think that this would be a somewhat steamy novel at times.  It truly was not.  In fact, the romance level was quite low, the focus being more on Aisling and her quests throughout the story.  It was a fun read and I will definately be picking up the next book, The Dark Mirrors of Heaven, when it comes out.

If you love Irish mythology and fae stories, I recommend picking this up and reading it!  I gave it a 3.5 mugs, but that was solely due to the fashion commentary note I mentioned above.  The story itself is a very good one!

How did I get into writing?
I practiced the original (oral) form of storytelling for over 30 years through role playing games. This is the best kind of training. If you make a mistake, you find out immediately. You learn how to build tension, how to do jump cuts, how to create multi-strand plotlines, and how to get someone personally interested in a story.

I went to school studying computer animation and special effects, but I found that without a story, there is nothing to animate. So I started reading books on writing…. Over the next 10 years, while reading nearly 200 books and taking writing courses, I began to adapt storytelling techniques to my games, and it worked!

FANTASY IMPERIUM
I created my own role playing game because I wanted to create a more accurate historical game, and also to help people tell better stories. I published the book and it sold out in two years. Since I never got into the game business to make money (I did it for fun), I spent too much on marketing the book and didn’t have the cash to print more books (I was exhausted anyway).

My brother, Charles Holloway, introduced me to several of his writer friends (William F. Nolan, George Clayton Johnson, Marc Scott Zicree, David Gerrold, Clive Barker and Ray Bradbury). Since I was around other writers, I decided to begin writing novels of my own.

I discovered John Truby, who I regard as the BEST writing instructor in the world and I bought everything he has on writing.