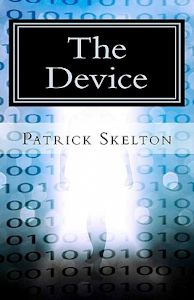 Tormented by guilt after the death of his fiancee, John Timmons lives life in a fog, retreating to his mountain cabin after work. While out hiking, a reflection catches his eye and he spots a small object sitting on a log in a nearby river. After a torturous journey down a ravine, he retrieves the object. It is mostly unremarkable but is engraved with the strange phrase "Project Daf Yasfhat". From this moment forward, John's life and those around him are never the same.

Patrick Skelton's "The Device" is a gripping tale that captivates readers with very subtle science fiction elements. Like all good directors or story tellers, it is what Skelton doesn't tell you in the narrative that keeps the reader guessing where it is all leading. Who is the mysterious man that appears throughout all of John's life like a guardian angel? What really happened to John's biological parents? What is the unnatural affliction to sound John has? Most of all, what is the device?

The Device is the debut novel by author Patirck Skelton, a dystopian/science fiction novel that I just couldn’t put down.  I am usually not a big science fiction fan because all too frequently the sci fi aspects become the entire focus, overpower the characters and their humanity, as well as overwhelming the story line.  I usually am left feeling like I have just read a text book rather than a fictional novel.  In The Device, the science fiction aspect enhances, rather than overpowers, the incredibly intriguing story.

It is definately a character-driven novel, but the plot is just as strong as the characters, a perfect balance that made the book that much more engrossing.  John Timmons is a perfect lead, a realistic person that has real flaws that we all can relate to.  Every one of the characters, main or supporting, was equally well-developed and combined to create a cast that just worked.  They were all very different people, but they were so realistic that I felt myself being emotionally involved in the various scenes.  There was a definate emotional roller coaster throughout the book, too, which I loved.  There were scenes that were heart wrenchingly sad, others that were sweet and beautiful.  There were scenes that made you angry, and others that were humorous.  There was no small amount of bittersweet moments, as well. I love a book that pulls me in, makes me feel along with the characters, makes me feel like I know the people inside the story.  I highly recommend this book!!

Patrick Skelton lives in Columbus, OH with his wife. When he isn’t writing, he’s playing the guitar, singing and recording.