Behind a wall in a hidden chamber lies a dark secret: The Blood Gate. Legend hints at its awesome power—and its dreadful costs. Since ancient times, the mysterious portal has been kept sealed and hidden. Only the great Xarhux himself had ever dared to enter...

And he emerged with the strength of a god.

And the mind of a madman.

Now, a young descendant of the Conqueror, the exiled Prince Hurrus, must discover the Blood Gate's terrible secret if he is ever to reclaim the throne of his father.

His people fight and die for his return. Bands of rebels wage a hopeless war against vast supernatural forces. Outmatched and increasingly desperate, a single dream keeps them alive—the dream of the return of their king. The dream of Hurrus.

But he must first face what few have survived—hired blades of the famed Prathian Guard...

The Blood Gate is an epic fantasy tale with rich characters, tons of action and intrigue, romance, and great storylines.  The world the author created for this book was extraordinary, with a created mythology of dieties and religion that was somehow still fully believable, despite being so far out of our own reality and mythologies.

Sometimes epic fantasy can become muddied with all of the subplots that are a part of the epic story, or those subplots can feel incomplete.  Neither was an issue with this book.  The subplots were almost stories in and of themselves and were woven together without a bit of the muddiness.  The action and the intrigue was kept at a great pace that kept the rather long novel from ever becoming stale and kept me turning the pages.

I don’t know that this is a book that would appeal to everyone, but I really enjoyed it.  It has a lot of depth and character and really draws you in.  Fantasy or not, it has a very historical feel to it, thanks to an incredibly well-created world.  The characters, whether you root for them or not, are very relatable and draw you right into the story!

David Ross Erickson is the Charles S. Roberts Award-winning designer of such popular historical computer war games as “Horse & Musket”, “Dragoon” and “Combat Command”. He was also the publisher and editor of the influential periodical “Wargamers Monthly”. His passion for military history is evident in both of his acclaimed novels, “The War God’s Men”–a faithful dramatization of the opening years of the First Punic War–and “The Blood Gate”–an action-packed fantasy inspired by the era of Alexander’s Successors. 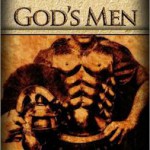