Every fairy tale has a dark side…

Elodie Rose has a secret. Any day, she’ll become a wolf and succumb to the violence that’s cursed her family for centuries. For seventeen years she’s hidden who and what she is. But now someone knows the truth and is determined to exterminate her family line. Living on borrowed time in the midst of this dangerous game of hide and seek, the last thing Elodie needs to do is fall in love. But Sawyer is determined to protect her, and the brooding, angry boy is more than what he seems. Can they outsmart a madman? And if they survive, will they find a way to beat the curse for good?

Red is the latest novel from Kait Nolan, not part of the Mirus series, and I think it just may be my favorite so far!  The story had a little bit of everything:  romance, twists and turns, teen drama, action, unexpected villians.  Loosely based on the Red Riding Hood tale, Elodie and her father have lived on the edge of society for the last several years after learning about a curse that has been passed for centuries along the femaie line.  When nothing happens as the curse says it should, Elodie begins to question the truth of the curse.  But eventually, things begin to change in her, things that can only be explained by the curse.  Meeting Sawyer, and falling for him, seemed to happen at the worse possible, especially when it becomes clear that someone is trying to kill her,

Elodie is such a strong character, and I love that.  She accepts her fate and the responsibility that comes with it, always putting those she loves ahead of herself.  Sawyer has problems and secrets of his own, but is inexplicably drawn to Elodie.  The two together are a great couple, lots of romance, without being overly steamy.  Sawyer is strong, but never overbearing, a fine line that is often crossed in YA romance.  Instead, his strength is in the form of support and guidance, a refreshing change.

One of the things I love most about Kait Nolan’s books is that, while the paranormal is the main thrust of the plot, there is so much more to the story.  Elodie’s problems with Amber had nothing to do with the paranormal side of the story, but was a really emotional subplot that had me feeling for Elodie.  The back and forth between Elodie and her dad and between Sawyer and his dad were also a huge part of the story, even without being focused on the paranormal.

The action is non-stop, and the twists and turns are fantastic.  The unexpected bad guy completely threw me and I loved that!

Definately pick up this book and give it a read!  It was FABULOUS! 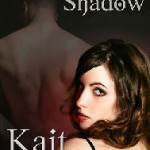 « Confessions of a Call Center Gal
The Blood Gate »