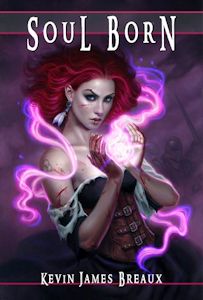 All Opal wanted was to be respected as a wielder of magic, but her teachers passed her over time and time again. When a mysterious warlord embarks on a conquest to destroy the lands of Illyia Opal seizes an opportunity to step out from the shadows of her instructors and take her rightful spot among them. Tala, an alluring young elf, was banished from her tribe, hunted and nearly killed by the beasts that dwell in the deep forests, but more than anything else she is a survivor. Joining forces with an ancient elemental power Tala finds herself in the center of an unrelenting human war. She never wanted any of this. Flesh like leather and bone as strong as steel Karn, a veteran from the first kingdom to fall, is fueled by vengeance. While pushing ever headlong into battle Karn begins to recall memories of another life; ghosts that haunt his dreams. Through death of soul, their world is born.

Soul Born is the first full-length novel by Kevin James Breaux, and the first of a trilogy.  From the moment, I opened this book, I was hard-pressed to put it down.  There is typically a pretty predictable formula in fantasy tales, with the battle between good and evil, the struggle for power, the quests for victory and the inevitable hero.  While this novel had all of those elements, it definately was so much more.  Because of the normal predictability, I kept expecting events to go in certain directions, and they just didn’t and I loved that fresh take on fantasy.  It was definately not a light and happy tale, but dark with lots of action and unexpected twists.  With a lot of epic works, you have a lot of back story before you get to the real meat of the story. I really enjoyed the fact that this story didn’t do that, but put you immediately in the story from the very beginning.  You learned the secrets and reasons for the unfolding story as you went along and it kept me thoroughly engrossed.

The story revolved around three main characters:  Karn (the warrior with the mysterious past), Opal (the enchantress struggling for recognition), and Tala (the elf shunned by her own kind).  Each of these characters have a common goal, to destroy an invading warlord before he destroys them and all that they know.  There was no clear cut good versus evil with these characters, nor with any of the supporting characters, which only added to the ability to relate to them as people.  As in real life, the characters have motives that aren’t always pure and are faced with choices that may sometimes be self-serving and hurt others around them.  Because of that, some of the characters were sometimes hard to like, but that was as it should be.  There times in the story where I felt like I was personally invested in those characters, completely emotionally engaged with them.  I absolutely love a story that can pull me in emotionally like that!

The ending was unexpected and great and left me waiting impatiently for the next book! 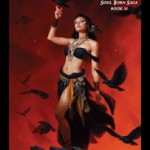