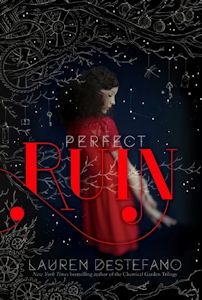 From the New York Times bestselling author of The Chemical Garden trilogy: On the floating city of Internment, you can be anything you dream. Unless you approach the edge.Morgan Stockhour knows getting too close to the edge of Internment, the floating city in the clouds where she lives, can lead to madness. Even though her older brother, Lex, was a Jumper, Morgan vows never to end up like him. If she ever wonders about the ground, and why it is forbidden, she takes solace in her best friend, Pen, and in Basil, the boy she’s engaged to marry. Then a murder, the first in a generation, rocks the city. With whispers swirling and fear on the wind, Morgan can no longer stop herself from investigating, especially once she meets Judas. Betrothed to the victim, he is the boy being blamed for the murder, but Morgan is convinced of his innocence. Secrets lay at the heart of Internment, but nothing can prepare Morgan for what she will find—or whom she will lose.

Perfect Ruin is the first in a new dystopian series, The Internment Chronicles.  And it is an amazing beginning!   Lauren DeStefano is fantastic at what she does, creating dystopian worlds with just enough of our own reality mixed in to make it entirely believable.  There is definitely a bit of the science fiction  feel to this book, but in a different way from her Chemical Garden trilogy.  In that series, the science fiction was literally about science, futuristic and extraordinary, but science.  In this book, it is a bit different, with the separation of the world itself.  There was a bit of a steampunk feel to this book, too, even though it is clearly not set in a distant past.

It is interesting that there is another common element between the two series and that is the idea of arranged marriage.  In her other series, marriage was bought and paid for and was in the polygamous way with the intent to repopulate the dying human world.  In Perfect Ruin, it is about the creation of an almost utopian world, creating matches based not on love but on compatibility.  But as it happens in many utopian societies, not everything is as perfect as it may seem.

The characters in this book are all very different.  One of my favorites was Amy, the younger sister of a murdered girl.  Although she was not a main character, I loved her strong, independent, somewhat rebellious personality.  The main character, Morgan, was a restless spirit and I could identify with her.  She tended  to question things that perhaps she shouldn’t have in her world, preferring to think for herself.  But that got her into trouble, too.

There is a lot of mystery and intrigue in this book, a lot of questions.  There are times when it had a bit of a “conspiracy theory” feeling to it, but not in a crazy, unbelievable way.  Instead, it added to the suspense and anticipation of it all.  There is definitely a cliffhanger at the end, but it wasn’t the usual “life or death” kind, but the kind that leaves  you wondering what is going to happen next!