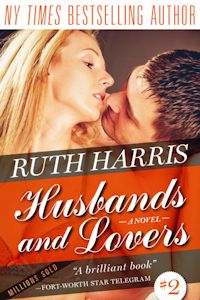 A lonely wife. A handsome lover. A jealous husband. A gun in a Tiffany bag.

The Married Woman--When Carlys Webber's marriage to millionaire Kirk Arnold falters, will she risk everything for the excitement of a brief affair?

The Single Woman--Wildly stylish fashion executive, Jade Mullen survives deception and divorce, but when she falls in love again, is she doomed to another betrayal?

The Husband--Wealthy tycoon, Kirk Arnold, achieves one dazzling success after another, but can his marriage survive a shocking legacy he struggles to forget?

The Lover--Architect George Kouras rises from humble beginnings to the top of his profession. When he and Jade fall deeply in love, they think they have invented a new way to live happily ever after, but have they?

Husbands and Lovers is the story of four main characters, set mainly against the backdrop of the 1970’s and 1980’s.  True life events were woven into the fictional story throughout the novel, which very much set the stage for the characters.  Being a child of the 1970’s and a teen of the 1980’s, I am a bit younger than the characters, but definately old enough to remember most of those events which really added to my enjoyment of the story.

The story was centered on four main characters:  Carlys (the married woman), Jade (the single woman), George (the lover), and Kirk (the husband).  It opened with a prologue in which events were taking place in their present tense, although the circumstances were left intentionally vague, for reasons that become clear near the end of the book.

Each part of the novel focused on one of those four characters, going back and forth in time to tell their story.  That back and forth can make the reading of a story confusing and somewhat muddy, but there was absolutely none of that with this book.  Instead it added to the interest of the characters and their stories and backstories.  While each character was developed in their own part of the novel, their stories were woven together throughout the story.  I really enjoyed the fact that no matter how much you learned about a character, enough was left unexplained that it throroughly built the suspense for the end of the novel.  All that had been unexplained or left vague came together in the end and made for a great conclusion to the stories of these four characters.

Because so much has changed in society since the time in which this story was set, it was interesting to revisit it and really see those changes.  The political and social events taking place at the time, the sexual politics and the changing roles of women were all very different then, and using that to form the backdrop for the four characters was fascinating.  So much of contemporary fiction focuses on women, but this novel was different in that it gave equal time to men and their stories. All in all, an excellent read that I highly recommend you pick up and read!

Ruth Harris is a New York Times and Amazon bestselling author and a Romantic Times award winner for “best contemporary.” Ruth’s emotional, entertaining fiction has topped Amazon’s Movers and Shakers list and her highly praised novels have sold millions of copies in hard cover, paperback and ebook editions, been translated into 19 languages, sold in 30 countries, and were prominent selections of leading book clubs including the Literary Guild and the Book Of The Month Club. In their e-book editions, Ruth’s novels have been featured on Ereader News Today, Pixel of Ink and Kindle Nation Daily.

Ruth writes about strong, savvy, smart and witty women who struggle to succeed and, when sometimes they don’t get what they want, they find something even better along the way. Critics have compared Ruth to Nora Ephron and Joan Didion and called her books “brilliant,” “steamy,” “stylishly written,” ”richly plotted,” “first-class entertainment” and “a sure thing.”

With her husband, Michael, Ruth indulges her wild side and writes bestselling thrillers with vivid characters, international backgrounds and compelling plots. Their thrillers have made numerous appearances in the top 3 of Kindle’s prestigious Movers & Shakers list; in the Top 100 in the Kindle Store; Hooked has appeared continually on three Medical bestseller lists since its publication; #1 and #2 on two different Political bestseller lists; #14 on the Thrillers bestseller list.

Publisher’s Weekly called Ruth’s and Michael’s thrillers “Slick and sexy [with] all the sure elements of a big seller written by pros who know how to tell a story.” Readers have raved, calling their books “awesome,” “gripping,” “chilling,” “a must-read,” and “a real page-turner.”

It’s no surprise Ruth is a writer. Her Mom was an RN who had a trove of big-city hospital stories—some funny, some sad, some touching—and told them with great style. Her Dad loved words, word play and language (Ruth still has his collection of dictionaries) and he is remembered by those who knew him as “always reading.” Ruth’s paternal grandfather was noted for his extensive library and both her parents were avid readers: her Mom loved popular fiction and her Dad bought four or five newspapers every day and subscribed to what seemed to be every magazine published—from Life and Look to BusinessWeek and Organic Gardening.

As a girl, Ruth wanted to be a professional ice skater. In her teens, she wanted to be a lawyer—a summer job in a law office cured her! After college, she got a beginner’s job in publishing and her career path—first as an editor and then as a writer—was set.