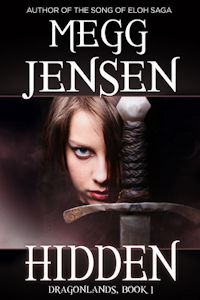 The mystery enshrouding Hutton’s Bridge is as impenetrable as the fog that descended at its borders eighty years ago. Each year, three villagers enter the mist searching for answers. No one ever returns.

Then a dragon falls from the sky to the town square, dead—the first glimpse of an outside world that has become nothing more than a fairy tale to Hutton’s Bridge. Except to Tressa.

Tressa grew up with Granna’s stories of the days before the fog fell. When Granna dies, leaving Tressa without any family, Tressa ventures into the fog herself, vowing to unravel the foul magic holding Hutton’s Bridge captive.

What she discovers beyond the fog endangers the lives of everyone she loves.

Hidden is the first in a new series, the Dragonlands, and it is fantasy of epic proportions.  If you have read any of her Song of Eloh Saga series, you know the kinds of worlds that Megg creates.  She is genius at creating fantasy worlds and this latest word treat is no different.  It is a very different world than Eloh, although just as filled with magic, intrigue, and mystery.  And dragons, there are dragons!

Hidden had a fantastic set of characters, some of whom I loved and some of whom I hated.  There were also others that I never quite got a handle on, but I think that is part of the fun and suspense of it all.  They were all very different, with personalities all along the spectrum, and some of them were rather eccentric and colorful.  Bastian and Connor, Tressa’s friends from her village, were as strong and selfless as Tressa herself was and that made them easy to love.  Tessa’s grandmother was one of those characters that I just couldn’t make up my mind about.  Most of the time, I felt like her intentions were good, but there were moments later on as things were revealed that made me question that a little.  Aside from the main characters, I loved Leo, Tressa’s unexpected and unlikely ally and friend.  He became her mentor, her friend, her teacher.  He was so eccentric and rather mysterious.  He was such a multifaceted character and I loved everything about him.

This is one of those reviews that may be a little vague when it comes to content.  It is unavoidable because there is so much that happens that I don’t want to take the chance of inadvertently giving something away that would spoil it for you.  There are more plot twists and turns than you can imagine, some of which had me rereading sections, not because there was something confusing, but because I had to make sure I read it right!  Just as soon as I would think that I had a handle on where the story was going, she turned the entire world upside down.  I can’t say how much I love that in a novel!

This is a must read for fantasy fans.  You should also check out Megg’s Song of Eloh Saga, which contains both the Cloud Prophet Trilogy and the Swarm Trilogy, as well as a bridging novel between the two. 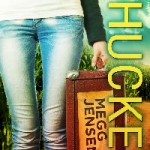 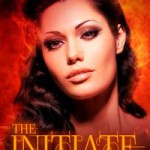