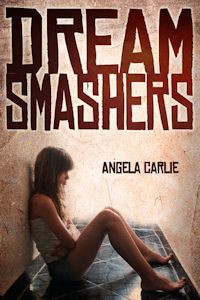 Sixteen-year-old Autumn has spent her entire life worrying about others. Her ailing grandma, meth-addicted mom, and a best friend who is always in trouble. She's spent the last few years attempting to worry less, to be carefree, without success.

Enter Evan, whose radiant attitude is an Autumn magnet. With Evan at her side, Autumn's able to let some of her worries go as they trudge through life's difficulties and fall for each other in the process.

A girl who no longer wants to care and a boy who cares enough for the both of them, Dream Smashers is a love story, but most of all, it's about letting go.

Dream Smashers is the debut novel of author Angela Carlie, and it was a novel that was just about impossible to put down once I began.  This novel was much darker and much grittier than most young adult novels, very raw.  While a coming of age story, it is also the story of a young girl struggling to be more than what life has given her as an example.  Autumn’s meth-addicted mother is a central figure in the story, having abandoned and emotionally abused Autumn since she was a little girl.  Autumn struggles between the love and the worry of a daughter for the woman who is her mother and the hate for the life her mother has chosen over her.  When Autumn meets Evan on a blind date, her life changes in unexpected ways, as he is from a life completely unlike her own.  He introduces her to spirituality in a way she never expected and she finds a peace and a joy that she has never known.

The author really did an amazing job with her characters.  It was very easy to get absorbed into the story with Autumn, to feel her frustration and hurt with her mother, and the stirrings of romance with Evan.  Rainy, Autumn’s best friend, despite having problems of her own, was also an extremely likeable character and I found myself rooting fer her as well.  Evan was definately the white knight of the novel, and he was the perfect hero!

Carlie’s writing, although raw and gritty at times, is beautiful.  It drew you into the story, in happy parts and in sad, and made you feel as if you were a part of the story.  The words aren’t always pretty, but they are perfect for the story.  Her physical descriptions of Jacinda, Autumn’s mother, were definately not pretty, nor easy to read, but they were realistic.  At other times, especially in some of the church scenes, the words were pretty and drew you into the spirit of the moment beautifully.

Dream Smashers is a truly beautiful story, from start to finish.  I loved that it tackled some hard subjects that you rarely find in teen fiction, and it did it in a realistic way.  There is definately some raw language, and some very strong themes of addiction, so I would recommend this for more mature teen readers, but the message is a universal one.