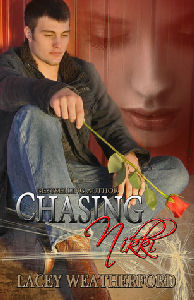 Chase Walker used to be a good kid-charming, athletic, and with a bright future ahead, but that was before travesty struck his life, sinking him into deep despair. Caught up in a world of drugs and alcohol, he doesn't notice time slipping away until he's arrested for underage drinking one night.

Fed up with watching her son destroy his life, Chase's mom relocates him to live in a small ranching community with his ex-military grandfather. Chase is far from happy about the situation until he meets, Nikki, the cute cheerleader who won't give football players like him the time of day.

Chase enjoys a good challenge though and sets out to claim Nikki for his own. He soon discovers she's more than a pretty face-she's a balm to his troubled spirit also. But when tragedy strikes Nikki's life too, suddenly Chase finds himself put to the ultimate test. Can he trust Nikki, and all that she's taught him? Will it be enough?

My advice?  Make sure you have a block of time before you start this book!  Once I started it, there was no putting it down.  I love to be so swept away by a story that there is no other reality for me while I am there and this definitely happened here.

I love that this book, and the series, is written from the point of view of Chase, our main man.  It was refreshing to read from a guy’s perspective and to see the world through his eyes.  The author made sure his voice came across as it should have, a YA/NA guy.  Lacey’s muse for Chase was a real Chase and it is clear that she really understood him and it came across in the book.

Chase starts the book as a bit of a bad ass, a bit of a jerk.  But we quickly realize just how tortured he really is and you can’t help but feel for him as he struggles through life.  Once he met Nikki, that is when you really fall in love with him as he attempts to impress her and make her his.  He is alternately sweet and adorable and intense and serious.

But there are definitely some deep and intense moments, moments that make your heart break.  And there are times when holding back the tears will be almost impossible.  Lacey didn’t shy away from the intense, the emotional, and the difficult and it made for a deeply emotional read.

« When the Stars Threw Down Their Spears
Finding Chase »