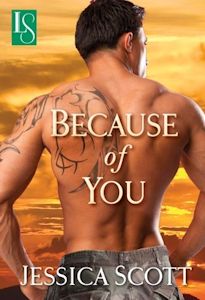 From the war-torn streets of Baghdad to the bittersweet comforts of the home front, two wounded hearts navigate the battlefield of coming home from war in this explosive eBook original from newcomer Jessica Scott.

Keeping his men alive is all that matters to Sergeant First Class Shane Garrison. But meeting Jen St. James the night before his latest deployment makes Shane wonder if there’s more to life than war. He leaves for Iraq remembering a single kiss with a woman he’ll never see again—until a near fatal attack lands him back at home and in her care.

Jen has survived her own brush with death and endured its scars. And yet there’s a fire in Shane that makes Jen forget all about her past. He may be her patient, but when this warrior looks her in the eyes, she feels—for the first time in a long time—like a woman. Shane is too proud to ask for help, but for Jen, caring for him is more than a duty—it’s a need. And as Jen guides Shane through the fires of healing, she finds something she never expected—her deepest desire.

Because of You is the first in the Coming Home series by Jessica Scott.  I recently discovered Jessica Scott through conversation with another author and was very excited to read this book.  Jessica is an active duty Army company commander, and that is the reason I so wanted to read her books.  I was an Army soldier for more than a decade and am an active duty Army wife.  Reading books with a military theme can be a bit of a crap shoot when you, as a reader, are military.  Some get it right, some get it wrong.  Just the fact that I spent so many years in the Army means that I tend to pick up on things that your average reader might not.  Sometimes this is a good thing, and adds to the story.  Other times, it isn’t because the mistakes can take away from the story.  There was absolutely none of the negative side of that knowledge with this book.

While the Army is a major part of this book, this is, at it’s heart, a romance.  But it goes so far beyond that with the themes that are in this book.  This is not a light read, but one that I found to be deeply moving.  The stories of war and the soldiers that come home from it are stories that can be heart-wrenching and the author didn’t shy away from that reality.  There are parts of this book that had me in tears, partly because I could relate to the story being told and partly because it was so very real to read.

What I thought was amazing was the author’s ability to tell Shane’s own story, with his own words and thoughts, and in a deeply male way.  If I didn’t know that it was written by a woman, I wouldn’t have guessed it.  There were things about Shane that, on the surface, probably seemed almost cold and overly stubborn, but struck a true chord of reality with me.  Those are the very things that made the “Army” in him true and realistic.  Jen, too, was a pretty amazing character with her own issues and story that filled me sympathy.

As I said, this is not a light book, even though it is a romance.  It is full of emotion and feeling, with some very dark and gritty scenes.  That stark reality is what made the book so beautiful to me.

USA TODAY Bestselling author Jessica Scott is a career army officer, mother of two daughters, three cats and three dogs, wife to a career NCO and wrangler of all things stuffed and fluffy. She is a terrible cook and even worse housekeeper, but she’s a pretty good shot with her assigned weapon and someone liked some of the stuff she wrote. Somehow, her children are pretty well adjusted and her husband still loves her, despite burned water and a messy house.

She’s written for the New York Times At War Blog, PBS Point of View Regarding War, and IAVA. She deployed to Iraq in 2009 as part of OIF/New Dawn and is currently a company commander stationed at Fort Hood.

Most recently, she’s been featured as one of Esquire Magazine’s Americans of the Year for 2012.