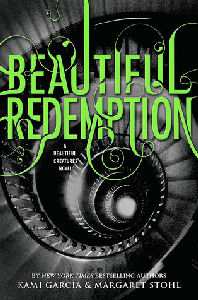 Is death the end . . . or only the beginning?Ethan Wate has spent most of his life longing to escape the stiflingly small Southern town of Gatlin. He never thought he would meet the girl of his dreams, Lena Duchannes, who unveiled a secretive, powerful, and cursed side of Gatlin, hidden in plain sight. And he never could have expected that he would be forced to leave behind everyone and everything he cares about. So when Ethan awakes after the chilling events of the Eighteenth Moon, he has only one goal: to find a way to return to Lena and the ones he loves.

This is the long-awaited conclusion to the Beautiful Creatures saga.  And, honestly, it was my least favorite of the entire series.  I had huge hopes for the book and, while I did enjoy it, I didn’t love it as much as I would have expected or liked.

The story was told from the switching POVs of Lena and Ethan, as they were apart for much of the book.  While I didn’t mind the back and forth (it was a necessary thing), I thought that the story dragged a bit during the time during which they essentially had separate lives.  Unfortunately, at times it was difficult to really understand how much time was even passing in the story.

I loved Ethan in this story, with his dedication and loyalty.  I had a hard time pinning Lena down in this book, however.  Sometimes she seemed powerful, the world’s strongest Caster.  Other times, she seemed a bit weak and “damsely.”  I came away from this series almost feeling as if her entire being was dependent upon Ethan’s presence in order to have a life and a personality.

All of that being said, I did enjoy the new twists and turns and the deep seated need to know how it would end for them kept me turning the pages!

Things to love about Beautiful Redemption…

If you have read the other books in the series, this is a must-read to close out this wonderful series!