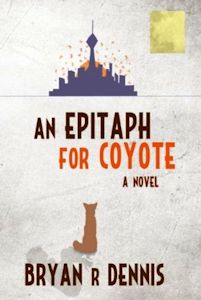 Here lies Henry Pluck -- corporate cubicle rat and frequenter of nursing homes. A perfectionist at work and an eater of sandwiches, he drove an import, lived alone in a box, and was virtually indistinguishable from any other office drone in Las Vegas, Nevada.
So might have read the inscription on his gravestone.
But when he encounters Rosa Santana, an unconventional and perplexing young woman from the desert, he learns what a defunct building feels like before a wrecking ball.
This is a portrait of a lonely man coming to terms with his flawed interpretation of perfection. For the world is not what Henry thinks it is, and as he’ll soon discover, neither is Rosa. This is the wild, mysterious world of 4,000 year old movies, cosmic irony, predators, and prey.
This is the American Dream, just before its pants fell down.

An Epitaph for Coyote is one of those novels that just gets under your skin and into your head and makes you take a long look at your own life.  The story is centered around Henry Pluck, an average young guy with no small amount of neurosis.  He lives alone in a house devoid of personaility where everything is “just so”.  He works as a finance clerk in an office, never happier than when he is at work.  There is a humdrum, “sameness” to his life that has seemingly dulled him to actually living life.  Until Rosa Santana comes into his life.  She is everything he isn’t.  She’s passionate, free-spirited, and determined to get the most of life.  Against all odds, they bond, first as friends and then later as lovers.  Rosa opens Henry up to experiences he would never have had without her, expanding his little world.  Henry can’t help but fall in love with her, even though there is so much about her he just doesn’t understand.  And Rosa shows her own love for him in her own, unique way.

This book is beautifully written, making you, as the reader, consider your own life and it’s meaning.  At times, the story is poignantly sad, at others light and humorous.  Although Henry is on the extreme end of the “square” scale, there is so much about him that all of us can relate to.  While Henry and Rosa are the main characters, there are other, more minor characters that are equally as interesting.  Vince, a former friend of Henry’s deceased father, has become Henry’s friend and father figure.  He is the epitome of a grumpy, old man, and reminded me of my own grandfather in many ways.  Carlos, a resident of the nursing home that Henry visits, is another grumpy old man, but a likeable one.  The loneliness that each of these men felt made my heart ache at times.

This is such an amazing read!  It is one that I think all of us could relate to on some level. As I read, I marked one of my favorite passages in the book to share.  As I prepared to write this review, I noticed that the author had shared the same exact passage on his own site.  It is a bit of sage advice that Vince gives to Henry and I thought it was wonderful.

Born and raised in the cornfields of Illinois, Bryan enlisted in the Army upon graduation from High School and served his term overseas. Afterwards he moved to Las Vegas, Nevada and enrolled in UNLV’s college of business. It took a degree in Accounting, years of daydreaming in cubicles, and a collection of stories piling up on his hard drive to learn he is a writer and not an accountant. He currently resides with his family in Las Vegas, Nevada.