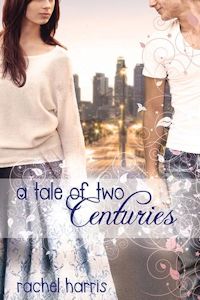 [color-box]Alessandra D’Angeli is in need of an adventure. Tired of her sixteenth-century life in Italy and homesick for her time-traveling cousin, Cat, who visited her for a magical week and dazzled her with tales of the future, Alessandra is lost. Until the stars hear her plea.

One mystical spell later, Alessandra appears on Cat’s Beverly Hills doorstep five hundred years in the future. Surrounded by confusing gadgets, scary transportation, and scandalous clothing, Less is hesitant to live the life of a twenty-first century teen…until she meets the infuriating—and infuriatingly handsome—surfer Austin Michaels. Austin challenges everything she believes in…and introduces her to a world filled with possibility.

With the clock ticking, Less knows she must live every moment of her modern life while she still can. But how will she return to the drab life of her past when the future is what holds everything she’s come to love?[/color-box]

As much as I enjoyed the first book in this series, My Super Sweet Sixteenth Century, I think I loved this one even more!  This installment focused in Alessandra, Cat’s “cousin”  from 16th century Florence, Italy.  Less dreams of a life of less restriction and more freedom, something that is hard to come by in her own era.  Through a touch of gypsy magic, she skips forward to visit her cousin Cat and to find her own answers in the future.  A future that contains a swoon-worthy boyfriend in the form of bad-boy Austin.

In reality, we have not one, but  two, swoon-worthy Book Boyfriends in this book.  Lucas, whom we met in the first novel, hopes to become Cat’s modern-day Lorenzo and he is all that one could want in a romantic hero.  And then there is Austin, the epitome of the bad boy, but one with a lot more depth than most would give him credit for.  He has been hurt and it has damaged him.  In a lot of ways, this novel isn’t just the story of Alessandra, but Austin’s and Cat’s as well.

Less is thoroughly endearing and a lot more complex than we knew from the first book.  She has spent her entire life behaving as she was expected to, with little thought to her own dreams.  In her heart, she was a bit of a rebel in the 16th century and frustrated with that.  Her journey was about letting go and being strong, recognizing her own dreams and wishes and accepting that it is okay to pursue them.  That is a pretty universal journey, and one I related to as a reader.  I think that is the underlying thing about this series that draws me in… the universal themes and struggles that we all experience in some form or another in our own lives.  These characters are rather deep, something that I really love.  Less’ inner dialogue as she grows from the shy and prim Renaissance girl to the confident girl she becomes is often very wise.

I am not generally a “sweet romance” or “time travel” kind of girl, but these books are so engaging that is impossible for me not to love them.  The romance is there, sure, but the story itself is so engaging and the humor is hilarious.  One of my favorite book lines of all time came from the first book, and this one was no less hilarious.  As for the time travelling, it is done so well.  Placing a 16th century girl in contemporary Hollywood is a culture shock, to say the least, and the results are often hysterical!  She sees the world through 16th century eyes and that new perspective is fabulous for the reader.

On encountering a taxi for the first time…

Determined not to give way to feelings of desertion, I stare at the door and wait for the coachman to come around and help me in. When he merely settles deeper into his seat and a footman fails to appear, I realize he expects me to get in by myself (Loc. 401).

On trying to pay for a taxi…

I am certain that I do not have any bucks on my person as even one such animal would hardly fit in the carriage with us, but perhaps fate has left me with something (Loc. 435).

Truly, out of all the modern inventions I have encountered thus far and wish I could bring back with me, the glass box shower is my favorite— even better than the marvelous toilet (Loc. 669).

On public displays of affection…

On discovering the “bikini”…

I cautiously take down a pink bikini and hold it against me. Fear and an intense loathing for the man who created this form of clothing churn in my stomach (Loc. 1782).

A little bit of swoon…

My first kiss is not the slow, sweet build-up I witnessed between Cat and Lorenzo. This is aggressive. This is passionate (Loc. 2444).

I am not without fear, but courage is taking action despite the fear. Knowing what you want, what you are meant to do, and proceeding despite any knots in your stomach or rocks stuck in your throat. It is walking boldly into the unknown with your chin held high… even if it quivers (Loc. 3725.

True happiness is something we create ourselves with our own choices: whom we want to be with, whom we let into our worlds, and how we choose to spend what little time we are given in this world (Loc. 3916).

This is a fabulous read!  The deep moments will pull you in and the humor will keep you there! 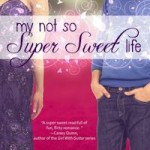