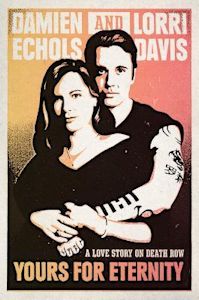 From one of the greatest legal injustices of our time sprang one of the most unlikely—and unforgettable—love stories. Damien Echols was just eighteen years old when he was condemned to death for a crime he didn’t commit. His case—that of the infamous “West Memphis Three”—gained notoriety after a documentary,

Paradise Lost exposed the biased nature of the trial and Echols as the precocious, charming—and tragic—figure at its center. Lorri Davis was a landscape architect living in New York City when she surreptitiously wandered into a showing of the film, and she left forever changed. She, too, was from the South, accustomed to being the outsider in a small town. She saw much of herself in Echols, understood how he could easily have been swept up in a witch hunt, and she couldn’t get him out of her head. So she wrote him a letter—and when it arrived in Echols’s penitentiary cell in April 1996, hers were some of the first kind words of support he heard.

Over the course of a remarkable sixteen-year correspondence, Echols and Davis grew to know each other, fall in love, and marry—all without ever being able to touch each other freely or be alone together. In Yours for Eternity, their extraordinary letters provide a singular portrait of their marriage, from the first, heady days of discovery to the final, painful months before Echols’s release. Through postscripts and footnotes, Echols and Davis describe how they overcame the enormous challenges and heartbreaks throughout the years—personal setbacks, legal complications, and much more. Yours for Eternity reveals a relationship unfolding in the most exceptional of circumstances. Powerful and incredibly intimate, it is a modern-day love story for the ages.

This is outside my usual realm of reviewing, but definitely NOT outside my personal reading interests.  So when I had the opportunity from Penguin to read this, I jumped at the chance.

Like much of the country, I followed the case of the West Memphis 3.  I have seen the documentaries produced by HBO (at the time of this writing, all three are currently on HBO Go), watched the movies, and read much about the case.  I have to wonder if perhaps the authors and publishers expected that any readers would be fairly familiar with the story because there is almost no background on the story of the crime and case.  I think perhaps a bit of background would have been helpful, especially for readers who are not as familiar with the story, or even those of us who do have some knowledge.

This is a collection of letters between Echols and Lorri, the woman who would become his wife.  Most of the book, and the heftier bulk of the letters are from the earlier few years of their blossoming relationship, before much of their communication moved to the phone and prison visits.  What I found most interesting is the tone of the letters.  There were times that they read almost like teenage love.  I am fascinated by the psychology of criminology and inmates within the prison system and this had me thinking about the psychology of the two.  Damien was imprisoned while he was still a teenager, his social development essentially halted the moment he was incarcerated, stunted before ever entering the system.  But Lorri is more than a decade older, educated and a professional.  The tone of her letters was often younger than even his, which often gave me pause.

I don’t judge love in any form, but there was something almost obsessive about theirs that was somehow both childlike and dark at the same time.  I give them both kudos for putting their innermost thoughts out their for the world to see and to judge.

This is definitely not the type of book that has a wide or universal appeal, but it is a fascinating collection of writings.  Anyone interested in the WM3, Damien Echols, or the odd relationship one has with an inmate would enjoy this.

Damien Wayne Echols, along with Jessie Misskelley and Jason Baldwin, is one of the three men, known as the West Memphis Three, who were convicted in the killing of three eight-year-old boys Steve Branch, Christopher Byers, and Michael Moore at Robin Hood Hills, West Memphis, Arkansas, on May 5, 1993.

Damien Echols was convicted of murder by a jury and sentenced to death by lethal injection. He was on death row under 23 hours per day lockdown at the Varner Supermax. On August 19, 2011, Echols, along with the two others collectively known at the West Memphis Three, were released from prison after their attorneys and the judge handling the upcoming retrial agreed to a deal. Under the terms of the Alford guilty plea, Echols and his co-defendents pleaded guilty to three counts of first degree murder while maintaining their innocence. DNA evidence failed to connect Echols or his co-defendents to the crime.

Lorri Davis was born and raised in West Virginia. She met Damien Echols in 1996 and they were married in a Buddhist ceremony at Tucker Maximum Security Unit in Tucker, Arkansas, in 1999. A landscape architect by training, she worked in England and New York City until relocating to Little Rock, Arkansas, in 1998. For more than a decade, Davis spearheaded a full-time effort towards Echols’s release from prison, which encompassed all aspects of the legal case and forensic investigation. She was instrumental in raising funds for the defense and served as producer (with Echols) of West of Memphis. Davis and Echols live in New York City.