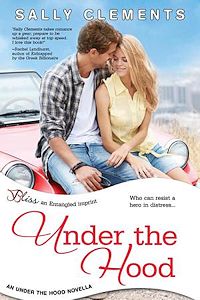 When sexy mechanic Alice Starr mistakenly believes attorney Mark Jameson needs her help, he discovers he likes being rescued for a change. Smitten by her confidence, he hides his expertise so he has an excuse to see her again.

Starting their new all-female garage, Under the Hood, is keeping Alice and her friends busy. She doesn't have time for a man. But with one kiss, she and Mark have advanced into water so deep she's in danger of drowning. So why hasn't he called?

Mark wants to tell Alice the truth so they can pursue a relationship. But he's got even bigger problems at his office when his bitter aunt threatens Alice’s livelihood. He needs a plan, fast, or else Under the Hood and his chances with Alice could both be ruined.

Under the Hood is the first novella in the series of the same name.  The series revolves around the ladies of Under the Hood, a car repair shop that caters to women.  It is owned and staffed by three best friends… Alice, Betty, and Mel.  This novella focuses on Alice, a woman who has clearly been hurt been men in the past.  She has moved to this town to start over, swearing off men and relationships.

Instead of the man sweeping in to rescue the damsel in distress, Alice does the rescuing.  She “rescues” her neighbor Mark, who just happens to be a gorgeous lawyer in town.  Trust was something she clearly didn’t have with men and it showed.  I think that represented what a lot of us have felt at times in our lives.  Betrayal and hurt can lead to distrust that carries from the one who hurt us to any and all.  So, along with the flirting, there was a whole lot of angst.

But right along with the romance, which was fantastic, there was a great story.  Alice is someone that most of us can understand.  There is a subplot that involves all of the ladies of the garage, some twists and turns and angst with that, too.

Some things you do for others and some things just for yourself (Loc.27).

This is a quick, fun read and one with a fantastic premise! 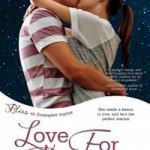 « The Luthier’s Apprentice Book Tour
A Tale of Witchwood Park »