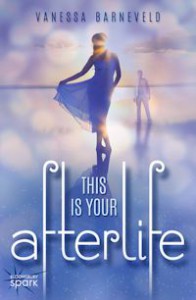 When the one boy you crushed on in life can't seem to stay away in death, it's hard to be a normal teen when you're a teen paranormal.

Sixteen-year-old Keira Nolan has finally got what she wanted—the captain of the football team in her bedroom. Problem is he’s not in the flesh. He’s a ghost and she’s the only one who can see him.

Keira's determined to do anything to find Jimmy's killer. Even it if means teaming up with his prickly-yet-dangerously-attractive brother, Dan, also Keira's ex-best-friend. Keira finds that her childish crush is fading, but her feelings for Dan are just starting to heat up, and as the story of Jimmy’s murder unfolds, anyone could be a suspect.

This thrilling debut from Vanessa Barneveld crosses over from our world to the next, and brings a whole delightful new meaning to "teen spirit".

This is Your Afterlife is the debut novel from Vanessa Barnevald and I can’t wait to see more from her.  I enjoyed the characters and the story line was rather engrossing, although there were moments that were perhaps a little slow in pacing.

There were so many things to like about the main character, Kiera.  I love flawed characters, characters not created to be anything more than a real person.  That is Kiera.  She is not the popular girl.  She has made mistakes.  She has real problems.  That makes her someone I can relate to and understand.  Her character is grieving for her recently passed grandmother, something I can all too easily understand.  Her grandmother had her own special gifts, gifts that Kiera herself may finally be inheriting.

Dan and Jimmy are brothers and a source of contention for Kiera.  The two brothers could not have been more different and the contrast and how Kiera relates to each of them is interesting.  In a bittersweet twist, it was death that brought the three of them together in the ways that it did.  There was definitely a touch of irony in that.

Even the antagonist, though this is a person that you are predisposed to dislike, was an interesting character.  There were some deep issues there and it made for an interesting twist.

This story had a great blend of themes… friendship, betrayal, loss, adjustment, family, love, forgiveness, loyalty, right along with a little bit of humor.

Barnevald’s storytelling is quite nice and this is a story that touches on some very real issues without going overboard with the heavy emotional toll.

I live on the east coast of Australia with my musician husband and two photogenic cats. My Young Adult books are represented by Beth Miller of Writers House literary agency. Three of those works have received nominations in the prestigious Golden Heart® Award in 2009, 2010 and 2014. On most days you will find me chocolate addled and trying to convince my cats to sit somewhere other than on my keyboard. The best thing about being an author is the free rein to make up tall stories, as well as short ones.

Speaking of short stories, one of mine was published in HarperCollins Australia’s e-book anthology, URL LOVE. I was inspired to write THE TWEETEST THING after my boss took me to a Duran Duran concert in 2012.

I’m excited about the release of my debut novel, THIS IS YOUR AFTERLIFE, on October 21, 2014. The cats? They’re not all that impressed – they’ve already appeared in the AWKWARD FAMILY PET PHOTOS book and the 2012 I Can Has Cheezburger desk calendar.

Be sure to check the blog page regularly for more news about my books, my cats and my baking disasters.