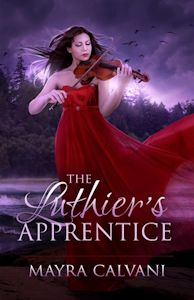 Niccolò Paganini (1782-1840), one of the greatest violinists who ever lived and rumored to have made a pact with the devil, has somehow transferred unique powers to another…

When violinists around the world mysteriously vanish, 16-year-old Emma Braun takes notice. But when her beloved violin teacher disappears… Emma takes charge. With Sherlock Holmes fanatic, not to mention gorgeous Corey Fletcher, Emma discovers a parallel world ruled by an ex-violinist turned evil sorceress who wants to rule the music world on her own terms.

But why are only men violinists captured and not women? What is the connection between Emma's family, the sorceress, and the infamous Niccolò Paganini?

Emma must unravel the mystery in order to save her teacher from the fatal destiny that awaits him. And undo the curse that torments her family—before evil wins and she becomes the next luthier's apprentice…

The Luthier’s Apprentice is a short novel with a very interesting premise.  Emma Braun is a sixteen-year-old American girl living in Brussels, a budding violin virtuoso.  Her violin teacher , Monsieur Dupriez, has gone missing, as have several other violinists.  She and her best friend Annika decide that they are going to investigate, eventually joining forces with Corey Fletcher, another of Monsieur Dupriez’ students.  The three of them stumble upon a truly imaginative mystery that they have to solve in order to save lives, their own and others.

This book is a wonderful mix of mystery and fantasy, even a little bit of light romance.  But it was the intrigue and mystery that was the foundation of the plot.  I was initially disappointed because I figured out who the villain was very early in the story and I assumed that it was going to ruin the rest of the book.  However, while I figured out the “whodunit” fairly quickly, it was the “whydunit” that was truly the heart of the story.

There was a lot of suspense and anticipation in this story which kept me turning the pages.  Sherlock Holmes fans will appreciate the plethora of references to him throughout the novel.  The target audience is young adult, but the story is easily engaging for older readers.  Although I have found no reference to this book being a part of a series, there is a bit of an opening at the end that would lend itself nicely to at least a sequel.

At first she had thought they were a string of coincidences, but not anymore. While scowling at obnoxious Billie Lynam during school recess, for instance, she wished he would fall flat on his face… and half a minute later, her wish was granted (Loc. 60).

To her horror, someone was already hiding in there. Her gasp was muffled as a strong hand closed over her mouth. Another hand yanked her inside and closed the pantry door (Loc. 565).

This was a great book with a fantastic new take on an old theme!  This is a must read!

Mayra Calvani writes fiction and nonfiction for children and adults and has authored over a dozen books, some of which have won awards. Her stories, reviews, interviews and articles have appeared on numerous publications such as The Writer, Writer’s Journal, Multicultural Review, and Bloomsbury Review, among many others. When she’s not writing, reading, editing or reviewing, she enjoys walking her dog, traveling, and spending time with her family. Represented by Serendipity Literary.

Mayra is a proud member of the Society of Children’s Book Writers and Illustrators.