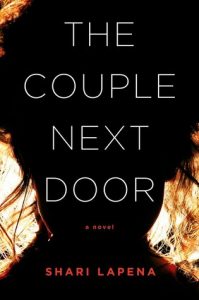 It all started at a dinner party. . .

A domestic suspense debut about a young couple and their apparently friendly neighbors--a twisty, rollercoaster ride of lies, betrayal, and the secrets between husbands and wives. . .

Anne and Marco Conti seem to have it all--a loving relationship, a wonderful home, and their beautiful baby, Cora. But one night when they are at a dinner party next door, a terrible crime is committed. Suspicion immediately focuses on the parents. But the truth is a much more complicated story.

Inside the curtained house, an unsettling account of what actually happened unfolds. Detective Rasbach knows that the panicked couple is hiding something. Both Anne and Marco soon discover that the other is keeping secrets, secrets they've kept for years.

What follows is the nerve-racking unraveling of a family--a chilling tale of deception, duplicity, and unfaithfulness that will keep you breathless until the final shocking twist.

The Couple Next Door is one of those books where it seems like there is very little ground. You either loved it or you hated it. I’m on the love it end. To be honest, some of the things the hate-it crowd have mentioned (a propensity for plot development through internal dialogue, one-dimensional characters) I did see, but I saw them in a different light.

The novel is a psychological thriller, full of secrets and manipulation. The focus of the story was a child abduction. It began with a truly “what the effing hell were you thinking” kind of moment when Anne and Marco leave their six-month-old baby at home with only a monitor while they attend a dinner party next door. Their babysitter had cancelled at the last moment, and so of course they have no other choice, I say sarcastically.

As with any great thriller, there are a lot of twists and turns, a lot of unexpected moments. But what I liked most about the story development is that, unlike many others in the genre, the big reveal as to the bad guy didn’t happen at the end of the book. On the surface, that may seem like a bad thing, but it really wasn’t. Roughly halfway through, the bad guy is revealed, and the story develops from there in interesting ways, which I won’t share for fear of spoiling the experience.

To address the hate things I mentioned above… Yes, there was a lot of plot development through the internal dialogue of the characters. But I felt like that was fitting for the story. Anne and Marco were barely communicating during this time, with each other or with anyone else, at least not in any real way. Secrets and suspicion kept them apart, and the amount of internal dialogue underscored that. As far as the one-dimensional characters, I think that’s pretty fair, at least for a big portion of the time, and I think that, too, fits with the story. Both Anne and March are each consumed with their daughter’s disappearance. It takes them over until there is almost nothing else there. Being so single-mindedly focused is one-dimensional, which seems right for these characters in this situation.

For me, the book was engrossing, especially with two unreliable narrators. It was thought-provoking in its own way… making you question how well I really know anyone, even those close to me, whether or not you truly understand the inner workings of someone else’s mind.

SHARI LAPENA is the internationally bestselling author of The Couple Next Door, A Stranger in the House, An Unwanted Guest, Someone We Know, The End of Her and Not a Happy Family. She was a lawyer and an English teacher before turning her hand to fiction.
She lives in Toronto.