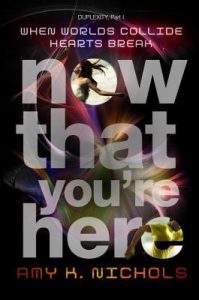 In a parallel universe, the classic bad boy falls for the class science geek.
One minute Danny was running from the cops, and the next, he jolted awake in an unfamiliar body - his own, but different. Somehow, he's crossed into a parallel universe. Now his friends are his enemies, his parents are long dead, and studious Eevee is not the mysterious femme fatale he once kissed back home. Then again, this Eevee - a girl who'd rather land an internship at NASA than a date to the prom--may be his only hope of getting home.
Eevee tells herself she's only helping him in the name of quantum physics, but there's something undeniably fascinating about this boy from another dimension... a boy who makes her question who she is, and who she might be in another place and time.

I’m a sucker for all things multiverse. There is such creativity to be found in the creation of a world in which such things are possible. Now That You’re Here uses a lot of science, but it’s used in a way that doesn’t lecture. Instead, it’s intriguing, even fun.

The story is told in alternating points of view, the Danny of another world and the Eevee of this world. In Eevee’s world, Danny is little more than a shadow on the fringes of her life. In Danny’s world, Eevee is alluring but almost untouchable. But as much as there is romance in the story, there is so much more. The twists and turns, the mystery and the intrigue, that is what keeps the reader turning the pages.

This is a great read if you love dystopian romance with a side of intrigue!

Amy K. Nichols has been crafting stories for as long as she can remember. She is the author of YA science fiction novel Now That You’re Here, to be published by Knopf December 9, 2014. The follow-up, While You Were Gone, will be published in 2015. She is mentored by award-winning crime novelist James Sallis and lives on the edge of the Sonoran desert with her husband and children. Amy is a member of SCBWI and SFWA, as well as the Class of 2K14 debut authors. 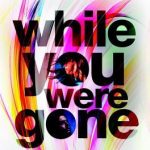