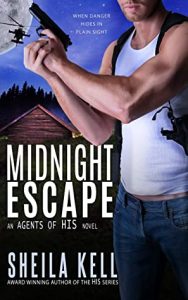 When danger hides in plain sight.
From Romantic Suspense BEST-SELLING and AWARD-WINNING Author • What happens when danger is where one least expects it? In Sheila Kell’s thrilling novel of desire and betrayal, a fierce protector and an artist are tied together by a potential threat from thousands of miles away.
HIS operative Danny Franks always wanted to become a helicopter pilot. When an emergency that nearly kills him and his evaluator pushes him to the edge, he’s determined he’ll never sit in the pilot’s seat again. That doesn’t mean he’s not all in when it comes to missions and getting the job done.
When a friend from his childhood asks for a safe haven for him and his sister, the sister—a stunning woman—is the only one to arrive. As Danny gets to know Moira, he easily opens himself to the possibility of more. But that’s the last thing on Moira’s mind. She’s determined that she doesn’t believe in love and plans to return to Ireland when it’s safe.
For months, the potential danger never manifests. Just when Danny lets down his guard, a threat appears from an unlikely source, throwing him in a spin. The only way to reach the woman who’s captured Danny’s heart in time is to fly to her rescue. With the love he holds for this woman, can Danny overcome his fear to reach her before he loses her forever?
“Wow! Can Ms. Kell tell a great story.” –InD’Tale Magazine
***
Midnight Escape is the second book in the Agents of HIS romantic suspense series. Agents of HIS is a spin-off series of the award-winning HIS series. Just like in the HIS series, you may read each Agents of HIS novel as a standalone.
If you like thrilling, edge of your seat reading with sizzling sex scenes, then you’ll love each installment of Sheila Kell’s best-selling series.
Pick up your copy of Midnight Escape to meet the hot-bodied agents of HIS today!
***
Meet the men and women of Hamilton Investigation & Security: H I SBooks do not have to be read in order, but you’ll get the whole picture if you do!
HIS Series His Desire (Jesse & Kate) His Choice (AJ & Megan) His Return (Jake & Emily)His Chance (Devon & Rylee)His Destiny (Trent & Kelly)His Family (Blake & Elizabeth) His Heart (Matt & Caitlyn)His Fantasy (Brad & Madison)A Hamilton Christmas (Entire family: No new romance)
Agents of HIS SeriesEvening Shadows (Boss & Sugar)Midnight Escape (Franks & Moira)
To receive a notice of Sheila’s latest releases when they’re available, be sure to select the “Follow” button.

Sheila Kell writes about the romantic men who leave women’s hearts pounding with a happily ever after built on memorable, adrenaline-pumping stories. Or, (since her editor tries to cut down on her long-windedness) simply “Smokin’ Hot Romance & Intrigue.” Her debut novel, His Desire (HIS Series #1), launched as an Amazon #1 romantic suspense bestseller and Top 100 overall, later winning the Readers’ Favorite award for best romantic suspense novel.

As a Southern girl who has left behind her days with the United States Air Force and as a University Vice President, she can usually be found nestled in the Mississippi woods, where she lives with her cats and all the strays that magically find her front door. When she isn’t writing, you can find Sheila with her nose in a good book, dealing with the woodland critters who enjoy her back porch, or wishing she had a genie to do her bidding.