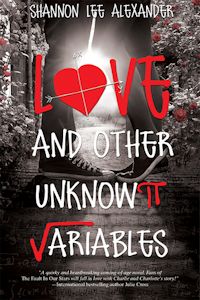 Charlie Hanson has a clear vision of his future. A senior at Brighton School of Mathematics and Science, he knows he’ll graduate, go to MIT, and inevitably discover solutions to the universe’s greatest unanswered questions. He’s that smart. But Charlie’s future blurs the moment he reaches out to touch the tattoo on a beautiful girl’s neck.

The future has never seemed very kind to Charlotte Finch, so she’s counting on the present. She’s not impressed by the strange boy at the donut shop—until she learns he’s a student at Brighton where her sister has just taken a job as the English teacher. With her encouragement, Charlie orchestrates the most effective prank campaign in Brighton history. But, in doing so, he puts his own future in jeopardy.

By the time he learns she's ill—and that the pranks were a way to distract Ms. Finch from Charlotte’s illness—Charlotte’s gravitational pull is too great to overcome. Soon he must choose between the familiar formulas he’s always relied on or the girl he’s falling for (at far more than 32 feet per second squared).

Love and Other Unknown Variables is the debut novel by Shannon Lee Alexander and I loved it!  So much of YA fiction is told from the female point of view so I loved that this one was from the POV of a guy.  Charlie Hanson, the most adorable nerd on the face of the planet.  He’s more intelligent than the average human being, at least when it comes to the world of academia.  His social skills are a little less honed, seen by his journal-like ruminations strewn throughout the book like entries in a science journal.

And then he meets Charlotte, the girl who turns his world on end.  She is everything he isn’t and she is a complete enigma.  And nothing about her is easy.  She blows hot and cold with him, two steps forward and three steps back.  She also happens to be the new best friend (and only friend) of his little sister and Charlie doesn’t want to do anything to get in the way of that.  The good big brother that just makes him that much more adorable.  And then there is the fact that Charlotte’s sister just happens to be his new English teacher, someone he is honor-bound to torment.  That is a subplot that cycles through moments of hilarity and moments of almost cruelty by a bunch of socially awkward and often arrogant super bright teenagers.

There is so much to love here.  There are moments of hilarity, moments of kindness, moments of sadness.  But they are all moments that are real and raw and emotionally charged.  There are a lot of subplots in this story, but it doesn’t get muddy.  Instead, they weave around the main story and allow the other stories to be told, stories that, in their own ways, are just as important.  There is a wonderful balance between the serious themes and the sweet and funny moments.

There is no denying that it is reminiscent of The Fault in Our Stars, a book that touched my soul in ways that I can’t even explain.  But in no way is this the same story.  It has its own moments, its own story to tell.  It is emotionally charged and raw and real and I love that so very much.  This is a read that will stay with you!

Writing a bio makes me cringe more than writing a synopsis, and believe me, I’m one big whiny baby about synopses.

I’m a wife, mother of two, and furry dog owner. I’m also a former middle school language arts teacher, book addict, and late bloomer. I only just figured out what I want to be when I grow up.

In 2009, I lost a dear friend to ovarian cancer. Watching her brave her treatments and stay hopeful in the face of this stupid disease was life altering for me. Losing her was devastating. I write because she gave me the courage and hope to do so.