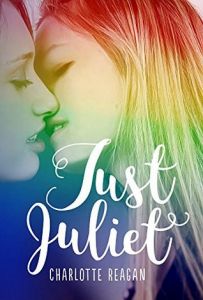 The coming out story that will completely change the way you look at love, now available for free on Kindle Unlimited.

Juliet represents the road less traveled. Will Lena take it?
Lena Newman is 17, her best friend’s a cheerleader, her boyfriend’s a football player, and as far as everyone is concerned, her life is sorted. But that’s before she befriends the new girl. Juliet is confident, slightly damaged, drop-dead gorgeous and a lesbian.

Lena realizes that her interest goes beyond just friendship. She sets off on a path of self-discovery where the loyalty of those closest to her will be tested.

Just Juliet is one of those novels that just left me with mixed feelings.  It is a story that has promise and a cast of diverse and what could be interesting characters.  There were moments when I felt like the story was rich and engaging, and other moments that felt flat to me.  I think some of that feeling was due to the fact that there really wasn’t a lot of conflict involved.  There were moments, yes, but most of the true conflict occurred for supporting characters before this story even began.

That being said, as characters, I liked Scott, Lena, and Juliet.  They were believable characters.  Lakyn was not the most likable character, but definitely the most legitimately tragic and probably one of the most believable in the book.  Lacey was a little over-the-top with her lack of compassion and self-proclaimed bitchiness.  Matt, Georgia, and most of the other supporting characters just seemed to fade into the background.

All in all, not my favorite read.  I think it had promise, but it just didn’t work for me.

Charlotte writes young adult romances focusing primarily on the LGBT+ community. She hopes to have lighthearted stories that bring about hope, laughter, and maybe even a few tears. She lives in a small Texas town with her cat, and can either be found writing or off traveling.