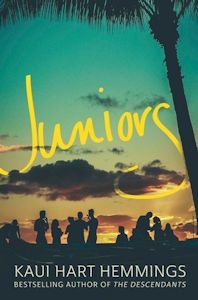 Lea Lane has lived in between all her life.

Bracing herself for the embarrassment of being her classmates’ latest charity case, Lea is surprised when she starts becoming friends with Will and Whitney West instead—or in the case of gorgeous, unattainable Will, possibly even more than friends. And despite their differences, Whitney and Lea have a lot in common: both are navigating a tangled web of relationships, past disappointments and future hopes. As things heat up with Will, and her friendship with Whitney deepens, Lea has to decide how much she's willing to change in order to fit into their world.

Lea Lane has lived in between all her life. But it isn’t until her junior year that she learns how to do it on her own terms.

I loved everything about this book!  The setting, the story line, the characters… all of it!

I originally picked this book because I have a soft spot for all things Hawaiian.  I lived there 18 years ago and I am about to move back, so I love to read about the place I love so much.  As a Hawaiian herself, the author shows a little of the Hawaii that exists away from the tourists, and that is the Hawaii that I love so much.

But even aside from all of that, the story line is wonderful.  Lea is the epitome of Every Girl.  Her mom is a minor actress and that has meant a lot of moves, a lot of first days as the new girl.  It has also meant spending a lot of time in her mother’s shadow,  She is brilliant, but a bit isolated from her peers and unsure of herself socially.  She also has a keen sense of who people are at the core, but even for her, that sense can fail her.

Her mother and she have recently moved back to Kailua and soon her mother’s friends have invited them to live in the guest house on their property.  It is an invitation into a whole new world, and while it has its perks, Lea clearly feels out of place.  And that is why I loved her character.  Even exposed to all of the wealth, she remained true to herself.  She unexpectedly becomes close to both the son and the daughter of her mother’s friends and even as she is becoming a part of that world, she still refuses to become anything other than who she is.  And I loved that.

While Lea is the focus of the story, the supporting characters are just as important as she is.  Danny, her childhood best friend from short trips to the islands, is her rock now that she is living in Hawaii full-time.  He is the bridge between the world she has always known, the Lea she has always been, and this new world she is experiencing for the first time.  Whitney is the daughter living in the main house and she is nothing like Lea thought.  Will, her brother, is also different than what she had once thought.  Those two characters really set forth the meaning of the Tolkein poem “all that is gold does not glitter.”  These characters are ones that are easily identifiable in one way or another an that drew me into the story.

This is a story about friendships, relationships, and staying true to yourself.  It is about hard choices and doing what is right no matter what the consequences.  It is a story that goes beneath the surface and shows that things are not always as they seem to be.  It is a beautiful story with fantastic characters.

Kaui Hart Hemmings has degrees from Colorado College, Sarah Lawrence, and she was a Stegner Fellow at Stanford University. Her first novel, a New York Times bestseller, THE DESCENDANTS, has been published in twenty-two other countries and is now an Oscar-winning film directed by Alexander Payne and starring George Clooney. Her new novel, The POSSIBILITIES, is an Oprah and People magazine “must read” and has been optioned by Jason Reitman. Her debut YA novel, JUNIORS, comes out in September 2015. She lives in Hawaii.