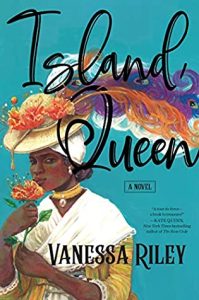 A remarkable, sweeping historical novel based on the incredible true life story of Dorothy Kirwan Thomas, a free woman of color who rose from slavery to become one of the wealthiest and most powerful landowners in the colonial West Indies.

Born into slavery on the tiny Caribbean island of Montserrat, Doll bought her freedom—and that of her sister and her mother—from her Irish planter father and built a legacy of wealth and power as an entrepreneur, merchant, hotelier, and planter that extended from the marketplaces and sugar plantations of Dominica and Barbados to a glittering luxury hotel in Demerara on the South American continent.

Vanessa Riley’s novel brings Doll to vivid life as she rises above the harsh realities of slavery and colonialism by working the system and leveraging the competing attentions of the men in her life: a restless shipping merchant, Joseph Thomas; a wealthy planter hiding a secret, John Coseveldt Cells; and a roguish naval captain who will later become King William IV of England.

From the bustling port cities of the West Indies to the forbidding drawing rooms of London’s elite, Island Queen is a sweeping epic of an adventurer and a survivor who answered to no one but herself as she rose to power and autonomy against all odds, defying rigid eighteenth-century morality and the oppression of women as well as people of color. It is an unforgettable portrait of a true larger-than-life woman who made her mark on history.

My relationship with this book is quite complicated. I was extremely excited to read this book, but it left me feeling somewhat flat. The story itself was fascinating, one that I feel needed to be told. But although I love a long book done well, this felt somehow both too much and too little at the same time. The “too much” comes from the fact that there were many parts that felt more like filler than moments that really added to the story. The “too little” came from the rather vignette-style chapters. They were often rather short, a snapshot of a moment, over before I could really get to know the characters within. This wasn’t helped by the lack of many time markers, beyond a general year. I felt as if I never truly got to know Dolly (aka Dorothy), nor the large cast of characters in her life that were important.

And that is a shame as Dorothy Kirwan Thomas was a powerful and influential woman of color who was driven to succeed in a world and time that didn’t want that to happen. She was extraordinary, both as a woman in a world dominated by men, but more importantly as a person of color. She was driven, ambitious, and incredibly inspiring.

It also felt as if there was often too much attention paid to the intricacies of Dolly’s romances. They were important to her story, of course, but it felt as if the focus on them came at the expanse of pushing the story of her way to freedom and success to the side. And that was the part I wanted to know more about. It felt almost disrespectful to reduce her story to that of her relationships with men, as if her interactions were the most important thing about who she was.

The white man wants to blame his sins on colored women. His depravity is our fault. If we take the abuse just to live another day, they say we are the seducers. They write the history.

A long habit of not thinking a thing wrong gives it a superficial appearance of being right.

If not for Charlotte, I’d turn around and pretend I didn’t see this, how free colored fell into the ways of owning folks just like the whites.

Somewhere on my journey, I started to love me. I won’t ever stop. My girls needed to love themselves, too, and to believe they were worthy of their dreams.

Vanessa is a member and former president of Regency Fiction Writers, a member of Georgia Writers Association, the Historical Novel Society, Crime Writers of Color, and on the Board of Directors of Christian Book Lovers Retreat. She’s an avid baker who loves creating her Trinidadian grandma’s cake recipes. You can find Vanessa writing on her southern porch with proper amounts of caffeine.