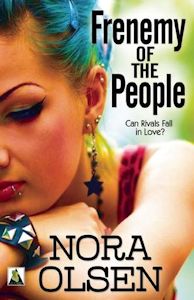 Clarissa and Lexie couldn’t be more different. Clarissa is a chirpy, optimistic do-gooder and a top rider on the school’s equestrian team. Lexie is an angry, punk rock activist and the only out lesbian at their school.

When Clarissa declares she’s bi and starts a Gay-Straight Alliance, she unwittingly presses all of Lexie’s buttons, so Lexie makes it her job to cut Clarissa down to size. But Lexie goes too far and finds herself an unwitting participant in Clarissa’s latest crusade. Both are surprised to find their mutual loathing turning to love.

A change in her family’s fortunes begins to unravel Clarissa’s seemingly perfect life, and the girls’ fledgling love is put to the test. Clarissa and Lexie each have what the other needs to save their relationship and the people they love from forces that could tear them all apart.

I have mixed emotions about this book.  Parts of it I truly loved and other parts… not so much.  Let me preface this by saying that I love, love, love seeing YA fiction that addresses the LBGTQ community.  There needs to be more of it!  That is 100% of the reason I requested this title through NetGalley, not to mention the ridiculously awesome cover.  As a pink-haired mama, I appreciate the haircolor!

The story was told in the alternating points of view of our two main characters, Clarissa and Lexie.   These are two girls that couldn’t be more different.  Clarissa is the epitome of a middle-class girl, into horses and her friends, not really considering much beyond her own life.  She spends a lot of her time looking out for her older sister, Desi, who has Down’s Syndrome and is one of my favorite supporting characters.  Lexie is straight-edge punk, ready to save the world, although she has a secret and unexpected love for butterflies.  Clarissa seems to be a bit on the immature side quite sheltered.  Lexie, although she comes from a wealthy family, is a bit of a rebel, sometimes even a little pretentious about her rebelliousness against the establishment.  As characters,  I love them both.

It’s the sexuality aspect and how it was presented that bothered me.  The way in which Clarissa came out seemed so lackluster.  One minute she is gossiping with her friends, the next… she’s bisexual.  It was undeniable once I thought about it.  I was drawn to girls the same way I was drawn to  guys (Loc. 111).  And there it was.  She spent the rest of the story announcing it.  It just didn’t come across as authentic to me, probably because of the naiveté she often showed.  It sometimes made her seem rather shallow.

And then there is Lexie, whom I loved as a person.  But I felt that at times she was almost a caricature of a “lesbian,” a stereotype.  Vegan, activist, punk rock, activist, social outcast.  There are nothing wrong with these things, just that, right or wrong, they have become associated with the social definition of a lesbian.  It just felt like Lexie’s character fed into a stereotype rather than a true person.

The story line was excellent, however.  There were some real issues and conflict that had nothing to do with the sexuality aspect, sometimes rather deep.  There were some clear statements on family dynamics, both through the relationship between Lexie and her parents and Clarissa’s with her own parents.  These are things that I think most all of us have dealt with at one time or another.  I also love that Desi was created to be a real person, not as an aside in light of her cognitive issues.  Fantastic!

Now, the name gay-straight alliance implies it’s a club for gay and straight students, but actually that’s just a name!  Ot’s also open to lesbian, bisexual, and transgender students.  I’m not sure what transgender is yet, but I found a website that’s going to explain it to me (Loc.219).  <– Uh, what?!

I felt like I was about to crack, that I couldn’t endure one more thing going wrong in my life (Loc. 1645).

You’re sweeping me off your feet with your rhetoric, comrade (Loc. 2112).

I had issues, yes, but aside from that,  I enjoyed the story that was the root of it. I think that YA fiction needs more LBGTQ characters!