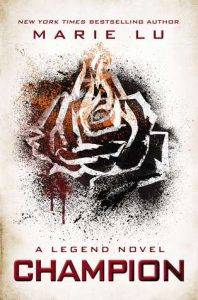 He is a Legend.She is a Prodigy.Who will be Champion?
June and Day have sacrificed so much for the people of the Republic—and each other—and now their country is on the brink of a new existence. June is back in the good graces of the Republic, working within the government’s elite circles as Princeps-Elect, while Day has been assigned a high-level military position.
But neither could have predicted the circumstances that will reunite them: just when a peace treaty is imminent, a plague outbreak causes panic in the Colonies, and war threatens the Republic’s border cities. This new strain of plague is deadlier than ever, and June is the only one who knows the key to her country’s defense. But saving the lives of thousands will mean asking the one she loves to give up everything.
With heart-pounding action and suspense, Marie Lu’s bestselling trilogy draws to a stunning conclusion.

Champion was the original end to the Legend trilogy, although at the time of this review, a fourth novel, Rebel, is available. I’ve loved the premise of this series, and I’m sad to see it coming to a close!

Day and June really made these books for me. Their characters are so different from one another, which creates such a great and interesting dynamic between them. And I loved that, along with all their good traits, they are flawed as well.

June is everything I love in a YA female protagonist. She’s strong and capable, she’s fiercely independent, and she’s got a strong moral center. And Day is equally as wonderful. He loves fiercely and everything he does is guided by that love. For Tess, for June, for his family. And that creates situations in which his loyalties are at odds. That adds such a great angst level to the story.

There were so many questions leading into this book, and I felt that Champion really answered those questions perfectly. The pacing was great, the story exciting. And the characters maintained their true selves to the very end.

However… the ending. While I appreciated it, it was so bittersweet! Was it the ending I thought I wanted? No. But I felt it was right for the story. The world of Legend was fraught with tragedy and pain, so in many ways, the ending was more than could be reasonably expected. So even though my tender heart thought it wanted something different, the ending was true to form for the world.

This is a great dystopian series, with fabulous world-building and amazing characters! A definite recommend!