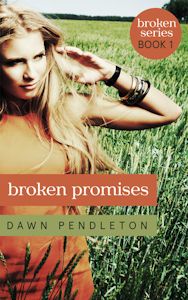 [color-box]After three years in Boston attending college, Mallory Wells has come home to Casper, Maine to care for her father, who is dying from cancer. She left Casper without looking back, leaving her small-town life and everyone in it, behind. Including her sexy high school sweetheart.

Luke Bates was devastated when Mallory left him for the city life. He managed to pull himself together and move on, even if only just barely. When Mallory shows up in town, Luke vows to stay away from her at all costs. So why does he want to spend as much time with her as he can? He knows she's going back to Boston eventually, but he just can't resist the lure of Mallory. Even if it means he's heartbroken again when she leaves.[/color-box]

This was an interesting book for me, and not so easy to review.  I read a lot of reviews before and after I read it and I seem to have a very different view of the main protagonists of Mallory and Luke, as well as several of the supporting characters.

The story was an excellent one, not shying away from real world issues and the darker side of love,life, and romance.  For me, I felt like the romance aspect was less in the forefront than the emotional struggles that went on over the course of the story.  And the struggles were real.  Cancer, insecurity, broken promises, judgment.  The book was a bit of emotional roller coaster, with me on the verge of tears one moment and giggling the next.

The characters were what made this book.  Whether you loved them and related them or they annoyed you, they had an affect on you as a reader experiencing their stories.  My favorite supporting character was Mallory’s dad.  He was full of love, understanding, and acceptance and I loved that about him.  Baker, Wolfe, and Gabby (all supporting characters) were also characters I could like, even if this book didn’t delve into their back stories as much.

That leaves Gabby, Rainey, Mallory, and Luke.  Most reviews I read didn’t mention much about the supporting characters, but seemed to love Luke and be annoyed with Mallory.  I had the completely opposite experience.  My issues with Gabby were with her own story, and how flippant and vague she was with her estranged husband and the impending end of their marriage.  It came off as immature and mean and it totally turned me off.  But she also was one of the few people that seemed to be a truly good friend to Mallory.  Mallory.  Everyone else seems to see her as self-centered, self-absorbed, and bratty, even the author.  I didn’t get that at all.  I felt like she got a raw deal from most of the characters in this book.  She isn’t perfect, of course, but I felt like a good portion of the story was bashing her, judging her and making assumptions against her.  And that annoyed the hell out of me.  Mallory left town after high school for college, to the detriment of her relationship with Luke.  And she was vilified for that choice.  She needed to get out, to find herself, and learn about herself outside a teeny town and part of a couple.  I’m sorry, but that seems like something that we all have every right to do.  She didn’t see her father’s illness because he hid it from her, but she was vilified for not noticing.  She didn’t come home, instead having her father visit her, because of the memories of her hometown and she was vilified.  She came home to be with her dad when she finally did find out and she was vilified.  There were times when the guy annoyed me so much with his assumptions and judgments and lack of understanding that I wanted to reach through my Kindle and slap him. Then two seconds later, he would be the perfect Book Boyfriend.  And below, what a horrible thing to say and it came from Luke.  That’s when he truly began to annoy me.

“You’re such a spoiled rotten brat, Mallory. If you cared, even once, for someone besides yourself, you would let Joe die in peace,” he barked.

Neither Luke or her BFF Rainey seemed to have any respect for the fact that Mallory was having a rough time adjust to her father’s death.  They expected her to be over it immediately, within days.  The quote below, just one of many, is from Rainey, and I just thought it was ill-timed and mean.

“Oh yeah, so rough . You got to spend the last few days with your dad and have a conversation with him. Mine died in a car accident three weeks after I moved to LA. No goodbyes there. The man who loves you only wants you to be happy, even if it’s not with him, you poor thing. Run away to Boston, Mallory. Just like you did after high school,” she sneered, and tore out of the house with Gabby chasing her.

These attitudes are what kept me from giving this a four full mugs.  And I am self-aware enough to know that it might not be as objective as I try to be.  The attitudes about Mallory’s grieving spoke to me in a personal way and it was hard to separate that from reading.  I have been, and still am, in a position similar to Mallory’s.  Being judged and scorned in times of grief is terrible and no one should go through that.

Despite my issues, I did truly enjoy the book.  I just felt that the cruelty to Mallory was off-putting.  But I think that may just be me.  I have already bought the next two books and have started the second, so I would definitely recommend it for lovers of chick lit, contemporary romance, and new adult books.

Dawn Pendleton is a new adult author who began her writing journey in New England with her husband and their pup, though she now resides in Georgia and promptly became a Southern Belle (or so she likes to think). When she isn’t staring at a blank page, willing the words to jump from her head to the screen, she’s usually playing on her iPhone, reading a book, or taking pictures with her fancy camera (which she has no idea how to use).