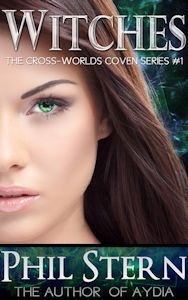 When it comes to magic, women have always been in control. Until now.

For centuries, only gifted young women have been able to wield magic, using their special talents to protect those in need.

But a powerful wizard has appeared, attacking empowered women across multiple worlds.

A young Terran-based sorceress, the strongest of her generation, must find and stop the magical madman before he can bend the Coven to his depraved will. Along the way, she must also confront doubts about the role her fellow witches may have played in her own family's demise.

I had never read anything by this author before, but I found this novel free on Kindle and decided to give it a shot.  It’s a short read, about 64 pages, but it is a terrific story.  It blends science fiction with fantasy and it is unlike anything I have  ever read.  I am not a huge sci fi fan normally, so I am always pleasantly surprised when I find something that appeals to me.  The fantasy world exists perfectly alongside the real world and makes for a fantastically interesting story.  Even more interesting to me is that the author is a man and writes such strong and real female characters.  He captures the “strong but vulnerable” aspect that I enjoy in realistic women characters.  The mix of mystery, magic, and science fiction was wonderful.  I have seen this book listed in some places as the start of a series, and I truly hope that is the case.

I really enjoyed this read and I highly recommend this!

Phil Stern is the author of both Contemporary and Science Fiction.

His debut novel, The Bull Years, was published in 2011. A hard-hitting commentary on both the frustrations and ultimate validation of modern-day life, The Bull Years follows the lives of four people throughout the late 80′s, 90′s, and into the 21st century, directly addressing the gradual alienation and disconnection often experienced during young adulthood.

“I wanted to write about characters everyone could relate to,” Stern says. “We’ve all had our ups and downs. I think people sometimes feel everyone else has experienced more success than they have, or are more firmly grounded in our world than they could ever be. My hope is that everyone will recognize a little part of themselves in Steve, Sophia, Dave, and Brooke.”

Born in 1970 in Ossining, New York, Stern grew up with a love of all types of science fiction, including the works of Robert Heinlein, Anne McCaffrey, John Wyndham, Piers Anthony, and more.

“Speculative fiction is so different today than it was back then,” Stern says. “I wanted to write stuff a bit more recognizable to fans of my generation. Science fiction should be about ideas and alternate worlds, strong characters and good stories.

Stern now lives in Florida, and is working on his next novel.