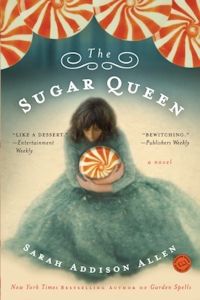 In this irresistible novel, Sarah Addison Allen, author of the "New York Times" bestselling debut, Garden Spells," " tells the tale of a young woman whose family secrets--and secret passions--are about to change her life forever.

Josey Cirrini is sure of three things: winter is her favorite season, she's a sorry excuse for a Southern belle, and sweets are best eaten in the privacy of her closet. For while Josey has settled into an uneventful life in her mother's house, her one consolation is the stockpile of sugary treats and paperback romances she escapes to each night.... Until she finds her closet harboring Della Lee Baker, a local waitress who is one part nemesis--and two parts fairy godmother. With Della Lee's tough love, Josey's narrow existence quickly expands. She even bonds with Chloe Finley, a young woman who is hounded by books that inexplicably appear when she needs them--and who has a close connection to Josey's longtime crush. Soon Josey is living in a world where the color red has startling powers, and passion can make eggs fry in their cartons. And that's just for starters.

Brimming with warmth, wit, and a sprinkling of magic, here is a spellbinding tale of friendship, love--and the enchanting possibilities of every new day.

The Sugar Queen is the second novel from author Sarah Addison Allen.  Josey is the loyal and underappreciated daughter who is well on her way to spinsterhood.  Her entire world revolves around her mother and her mother’s needs, a mother that keeps her daughter firmly at her side and in her control.  Her one friend is Chloe, a woman who has a unique and inexplicable relationship with books that sometimes borders on inconvenient and annoying.  Other than Chloe, Josey’s escape consists of the mounds of romance novels, travel magazines, and sweet treats that she hides in her closet.  The one thing that Josey always looks forward to, however, is mail time, for reasons we quickly find out.  This is the whole of Josey’s narrow existence,… until the day Della Lee Baker shows up in her closet and becomes Josey’s unlikely fairy godmother.

From the moment I picked up the book, I could not put it down, literally.  I tried to slow myself down, not wanting it to end too soon, but there was no stopping.  The character of Josey was so well developed that you felt like she was your socially awkward best friend.  You just wanted to reach into the story and tell her you loved her and give her that needed hug.  Della was quirky and funny, and at first glance, easy to underestimate the depth of character she possessed.  Chloe was just as engaging and real as the other women, despite her little magical habit.  You felt her emotions right along with her.  Intertwining the three women’s stories where the tales of the men in their lives, and the dynamics of the different relationships.  And there was the inevitable plot twist, a twist that wrapped up a beautiful novel with an equally wonderful ending.

« Garden Spells
The Girl Who Chased the Moon »