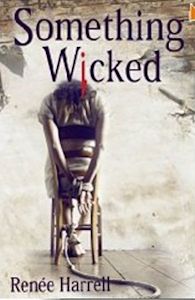 What if a man loved so deeply and so selfishly, he was willing to do whatever it took – including murder -- to reincarnate his lost lover? And what would happen if he thought his true love had returned to this earth, without any knowledge of who she truly was?

What would happen next? High school student Ann Lippens is about to find out….

Cody said, “You were innocent when I met you. Innocent when I lost you. You’re innocent now.”
“I’m not exactly innocent.”
“You’re pure.”
Pure? Ann questioned. What’s that supposed to mean? I’m a virgin?
Then she thought, What if I wasn’t?

There are so many things to like about Something Wicked.  One of my favorite things about it was that the characters weren’t created to be perfect.  Ann and Kim had much in common with normal, everyday teenage girls.  Neither one were in the “in” crowd, but nor were they outcasts.  Ann was a less than average student, while Kim was a good student.  Their flaws made them extremely relatable and likeable and far easier to become emotionally involved with over the course of the story.

The plot was very engaging and drew me into it from the beginning of the story.  There was a lot of mystery and suspense, and it was well-paced for the age group for which the book is intended.  The conclusion wasn’t surprising, and I usually like to be more surprised with an unexpected twist or two.  Generally, I like fewer clues for the “whodunit” and the “why’s”, but for a lower aged young adult reader, I think it was well done.

There are some definate messages in this book.  Sometimes those messages in young adult novels can be overdone, making the book less of a story and more of a sermon.  But in Something Wicked, it was subtle and didn’t distract from the plot.  For Ann, there was the lesson that you don’t put aside your values and beliefs for a boy, a message that I think is great in a young adult novel.  Kim’s story taught that it wasn’t important to be yourself, and not change yourself to please someone else. While the wrap up to this story wasn’t particularly surprising, there was a nice cliffhanger in the last few sentences of the novel, leaving the way for the next Ann book, which I will surely be buying!

“Renée Harrell” is really two people. Our pen name is the semi-pseudonym of Renée and Harrell Turner, and we’re a wife-and-husband writing team. Our first novel was a work-for-hire YA mystery and was written under a much more famous pseudonym. It did pretty well, too.

Under our own pseudonym, we’ve written a trio of e-books. “After Things Went Bad” and “Bill Shakespeare’s Next Big Mistake” came out under our own Hunting Monsters Press logo, while “Wicked Games” can be purchased by the good people at Cobblestone Press.

In April, we published “Something Wicked”, a young adult mystery, in both paperback and electronic editions. In September, we’ll be publishing “The Atheist’s Daughter”, a supernatural thriller.

We’re currently working on “The Preacher’s Son”, our next novel in the Winterhaven series.