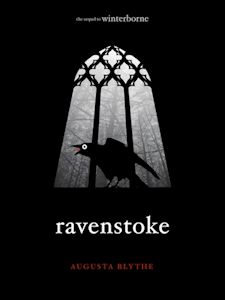 In WINTERBORNE, Loie and Mia's seventeenth birthdays brought more drama and surprises than they ever expected. Now, in Ravenstoke, they are adjusting to the aftermath and struggling to keep those newfound powers in check. When Andreas is called away to England under mysterious circumstances, a new guy is sent to Salcey Ridge in his place. Cian is smarmy and cocksure and Loie wants nothing more than to unleash a hellhound on him. Unfortunately, Cian isn't the only complication in their lives as the girls must also contend with the reappearance of Mr. Winterborne himself and Loie's most dreaded fear of all - a part in the school musical. Can the girls survive the rest of junior year unscathed?

Ravenstoke is the second in Augusta Blythe’s Universe Unbound series, and I love it just as much as I did the first.  One of the things I like most about these books is that the author doesn’t follow the typical YA formula of “boy meets girl, boy gets girl” with all of the attending angst.  There is all of that, but done in a refreshing way that doesn’t always end in the ways you think it will.  It keeps the story refreshing and interesting and absolutely engaging.  Once I began, I didn’t put it down until I finished it!

The story picks up soon after the first book, Winterborne, ends with Loie and Mia struggling to fit in their new roles in life.  Secrets have been exposed that have caused them to have to completely reassess their lives.  There is so much to this story:  heartbreak, sadness, loss, fear, distrust, love of all kinds.  The plot is just as much a story of relationships (Mia and Loie, Loie and Andreas, Mia and Andreas, Loie and Cian, Loie and her father, Loie and her mother) as it is about the paranormal themes.  The characters, whether you loved them or hated them, were entirely believable and made the story as much as anything else.  There is less full-on action than in the first novel, but so much took place in this that the series progressed by leaps and bounds.

Definitely a must read, after Winterborne. 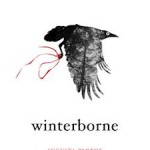 « The Initiate
Between the Devil and the Deep Blue Eyes »