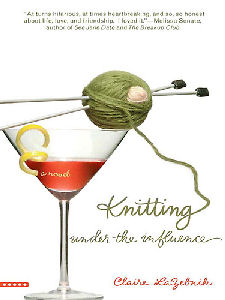 When you're in your late twenties and nothing in your life seems to be falling into place, knitting is an awfully seductive way to spend your free time. After all, as long as you're following the instructions, you can knit row after row with the knowledge that the pattern will emerge and you'll end up with just what you wanted. Life, on the other hand, doesn't come with a stitch counter, so Kathleen, Sari, and Lucy, the heroines of KNITTING UNDER THE INFLUENCE, just have to figure things out as they go along.

Their weekly Sunday knitting circle is the only thing holding them together as Kathleen is cut off financially by her family and forced to enter `the real world' for the very first time at the age of twenty-seven, Sari finds herself falling for the man who made her life a living hell in high school but who now desperately needs her help, and Lucy finds herself torn between emotion and reason when her lab and her boyfriend are assailed by an animal-rights group.

At their club meetings, they discuss the really important questions: how bad is it, really, to marry for money if you like the guy a lot anyway? Can you ever forgive someone for something truly atrocious that they've done? Is it better to be unhappily coupled than happily alone? And the little ones: Can you wear a bra with a hand-knit tube top? Is it ever acceptable to knit something for a boyfriend? And why do your stitches become lopsided after your second martini?

I expected this book to be a lighthearted “chick lit” book with a crafty twist, and it was.  But it was also much more.  Not only were the characters well-developed, but the storylines were much deeper than I would have expected.  The crafty twist was there, but was definately second to the real stories being told, which kept it from being “kitschy”.  The book was centered around three women, Kathleen, Lucy, and Sari, who bonded over their weekly knitting group.  Kathleen struggled to find her own way in the world, without the easy support of her family, while Lucy questions her romantic life and her career.  Sari deals with family issues and struggles to reconcile tragedies of her childhood with the changing feelings toward the very man that had caused her such pain.  The storylines were well thought out and developed and there were things about each character that I could identify.  I did have a little trouble getting into it for longer than I would have liked, but once I did, I couldn’t put it down!

Claire LaZebnik lives in Los Angeles with her TV writer husband and four children. She is the author of the novels THE SMART ONE AND THE PRETTY ONE, KNITTING UNDER THE INFLUENCE, and SAME AS IT EVER WAS and co-author of OVERCOMING AUTISM: Finding the Answers, Strategies, and Hope That Can Transform a Child’s Life and GROWING UP ON THE SPECTRUM: A Guide to Life, Love, and Learning for Teens and Young Adults with Autism and Asperger’s.