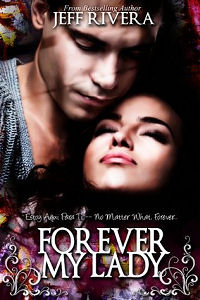 Dio Rodriguez grew up on the streets and knew all too well the hard, cool feeling of the barrel of a gun tucked down the back of his jeans. But his hard exterior softened when he met Jennifer. Jennifer understands Dio like no one else and makes him want to be a better man. Suddenly a drive-by shooting lands Dio in a prison boot camp and sends Jennifer to the hospital. When Dio learns that Jennifer is pregnant, he realizes that he must find a way to turn his life around and return to his lady. But can trainee Rodriguez get his act together among the hardcases in prison? And will Jennifer be waiting for him if and when he does?

Forever My Lady is such a unique take on contemporary romance, no doubt in part due to the fact that it is written by a man.  The story is told largely from the point of view of Dio and I found it truly refreshing to read a book of this genre from the perspective of a man.

This is not a light and fluffy novel, but raw and rather gritty at times.  It doesn’t gloss over the emotions and choices that the characters make, but shows them in a way that keeps them real.  The entire book takes place within cultures and lifestyles that I know next to nothing about, and I really enjoyed that.  That is the point of fiction sometimes, to transplant you from what you know and put you somewhere new and different.  The Latin culture, the gang lifestyle, being sent to prison boot camp… these are completely new areas to me, but the author does such a good job creating these things that my lack of knowledge means nothing.

Dio is a good boy gone wrong… or so we hope.  He loves his girlfriend Jennifer, but there is no question that he has made some bad choices, landing him in prison boot camp for them.  Jennifer is a good girl, coming from a religious family that doesn’t tolerate the gang banging ways of Dio, no matter how much he loves their daughter.  There were times during the book when I just wanted to reach inside and grab him and shake some sense into him before he totally screwed up his life.  But you couldn’t help but feel for him, too.

There were a few of the less central characters that I really loved.  While the story didn’t focus on these characters, they had stories of their own that I really fell into.  Simon, Dio’s friend and prison mate, was one of those characters.  He was not at all equipped for prison culture and it showed.  He was such a tragic character and I felt for him throughout the book.  Louise was another character I loved, an unlikely mother figure for Dio in the prison boot camp.  Her story, too, was tragic at times, but her kindness to Dio was heartwarming.  And Jackson, the DI for Dio’s group in prison, was far deeper and more compassionate than I ever would have imagined.

The ending is what really got me.  Based on the prologue, I thought I knew where it was all going to go.  I was wrong.  The ending was a complete surprise to me.  I liked it because I learned to love Dio, but it left me wanting to know how the future played out for him!

Things to love about Forever My Lady…

A fascinating and refreshing read!  I really enjoyed this!

Jeff Rivera is an author and inspirational media personality. He has appeared on national television, radio and print in such outlets as Forbes.com, The Boston Globe, Publishers Weekly, Right On! Magazine, Rotarian Magazine, TMZ, WABC, WNBC, WCBS, SITV, American Latino and NPR.

He also writes or has written for Entertainment Weekly, Mediabistro, GalleyCat, Publishing Perspectives, Digital Book World, Examiner, American Chronicle, School Library Journal and the Huffington Post and has been invited to speak and inspire groups all over the world from South Carolina to Nigeria. He has been on panel discussions for The Library Journal, Authors Guild, the Harlem Book Fair and many others.

He is known to have broken the news that Seth Godin was ditching traditional publishing which lead to mentions on hundreds of blogs and media outlets including The LA Times, Fast Company, and New York Observer. His news break that Jackie Collins would be self-publishing the US-version of her eBook lead to mentions in The Bookseller, The Guardian, USA Today and hundreds of other outlets.

His humble beginnings of living in American poverty on welfare and food stamps as the child of a single mother, to his days living in his car and final rise to becoming a published author, journalist and media personality have inspired many.

Rivera created a massive online following before the eBook revolution even existed. He was able to land an agent and a book deal with Warner Books (now known as Grand Central Publishing) within 7 days. He has used the knowledge he gained from this experience to help coach his clients on social media campaigns and has helped over 100 clients take the first step in landing an agent too.