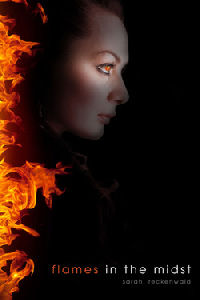 What if you denied being a witch your whole life?

What if you believed you killed your own mother?

What if you were wrong?

Jade Hale seeks a normal life as she hides her magical and tragic upbringing. But when destiny steals her from the present to her past, she discovers an unwelcomed truth — her mother’s death wasn’t an accident. In a whirlwind of circumstance, her quest for justice sweeps her back to her magical roots, and suddenly, her every decision controls the past, present, and future. Will she be able to hold onto her new life while immersed in the magical world she left behind? Her confusing and disturbing attraction for a strange, yet familiar boy from her past could destroy both.

Flames in the Midst is the debut novel of Sarah Reckenwald and a fabulous start!  I really enjoyed this book and I am definitely going to be reading the next book in the series.

Jade is an interesting character, different from many lead female characters.  She is a bit socially awkward and has lived her life a bit distanced from the rest of her peers, purposefully.  She is young, but mature because of the life she has led with a world view that is different from most girls her age.  I actually found that a refreshing change, to be less focused on romance and more on life itself.  This is not to say that there isn’t romance and steaminess, however!  There definitely was and it was great!  I just liked that there was more to her character.

There was a lot of back and forth in time with this book, but it was seamlessly done.  Many times, that back and forth can be confusing and a little distracting, but, because of the underlying theme of the book, it was perfect.  Much of it takes place in modern-day Saint Augustine, Florida (the author’s hometown) but much of it was in the Salem, Massachusetts of the witch trials.    I really liked that fact that it was a well-researched book with accurate facts.  Too many times, poor research leads to distracting moments when inaccurate details are written as fact.

Things to love about Flames in the Midst…

If you like witchy books with mystery and intrigue, this is a good book to pick up!

I am a high school English teacher. I live near St. Augustine, FL with my husband and three children. St. Augustine has always been alluring to both my husband and I, so it seemed like a perfect backdrop for one of the most mysterious characters in Flames in the Midst, Anastasia. I plan to write more about Anastasia and explore her history as it intertwines with the history of the Nation’s Oldest City. In the meantime, I am concentrating on Dreams in the Midst, the sequel to Jade Hale’s first adventures. Jade still wants a balance between normalcy and her magical roots, but without so much as a clue to Evan’s whereabouts things look bleak. That is until the bodies start piling up.