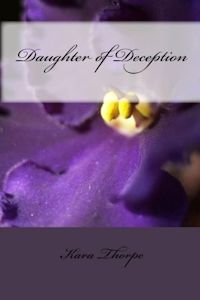 That’s what clairvoyant Viola Ashwood has been her entire life. She wouldn’t mind quite so much if her father hadn’t been possessed by a powerful demon nearly a decade earlier. After recovering from a tragic confrontation with Daddy Dearest, Viola wants nothing more than to get back in to the federally-funded, but privately run, demon-hunting Network. Duke, her brother’s ex-best friend and the guy she’s crushed on since she was six, stands in her way. As Network regional head, Duke’s got plenty of reasons for keeping Viola out of his region, and that’s before he considers the fact that her father’s on the Network’s most wanted list

Just when Duke grudgingly allows Viola into the Network, her father - still possessed and more obsessed with Viola than ever - reappears. While trying to stay one step ahead of the demon, Viola struggles to overcome fears about her surprise demonic heritage while learning to control her new abilities - especially the one that has her raising zombie squirrels in the middle of the afternoon. Together, Duke and Viola deal with dangerous demons, centuries of family secrets, and a mysterious link that may bind them for life.

Daughter of Deception is the first book in the Family Lies series.  In a lot of ways, it is a paranormal Romeo and Juliet.  Duke is the regional head of the Network, an organization of people with special abilities dedicated to hunting demons.  Viola is the daughter of a man possessed by a powerful demon and from a family with a long, dark, and mysterious past.  Against his better judgment, Duke takes her back into the Network and walks right into the demon hunt of his life.

I was hooked from the moment I started reading the story.  Duke and Viola are charismatic, interesting characters and the dynamic created between them was fascinating.  The story was exciting, with a ton of twists and turns.  It had magic and intrigue, betrayal and loyalty from unexpected places.  There was pain and there was humor.  Aggie, Duke’s grandmother, is one of my favorite characters in the book, being everything to Viola that her own family was not.  This was one of those books that you fell into and felt as if you were a part of the story. I definitely recommend clicking one of those “buy it” links above and picking it up!  The second book in the series, The Chaos Child, is also out so pick that up, too!

Kara Thorpe started writing as a distraction in French class and never stopped (just don’t ask her to conjugate many verbs). Born and raised in Texas, she loves all things historical, scientific, and downright geeky. Though she prefers to write short, character-driven stories, she ventured into the world of the novel with the first book of the Family Lies series “Daughter of Deception.”