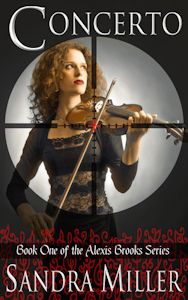 Three simple words from her telephone in the dead of night send violinist Chrispen Marnett’s life spiraling in directions she never imagined. The chance to work with the greatest violinist alive drew her to Newton, but nothing could have prepared her for what she found there. Terror lurks in innocent places–a ringing phone, a late-night rehearsal, unexpected flowers.

And what could have prepared her for Alexis Brooks: symphony concertmaster, international superstar, and accused murderer? Withdrawn and moody, Alexis is cut off from everyone around him; his colleagues in the symphony, his fans, even his own father. Everyone from her mother to the Newton Police has warned Chrispen against Alexis, but as her own danger increases, he may be her only ally.

Join Chrispen on the journey of a lifetime as she fights for her sanity, her happiness, and her life. To survive, she must unravel the layers of the past and learn the secrets the Newton Philharmonic Symphony Orchestra hides.

Concerto combined the best of mystery, romance, intrigue, and suspense and wove into a story that I just couldn’t put down.  From the first page, the story drew you in and just wouldn’t let you go.  Chrispen is a violinist with the local symphony and is looking at a chance to play with one of the greatest violinist.  But instead of a rosy future, her life spins out of control as the mystery, fear, and suspense begin.

This was a fantastic book that kept me up far too late because I just HAD to finish it.  Chrispen was a delightful lead in the book, a fully “real” character that has the reader rooting for her.  Alexis was one of those characters that, for most of the story, you just couldn’t decide if you were supposed to love him or hate him.  That added so much richness to the suspense and mystery of the plot.  All of the characters, rather main or supporting, were richly created and capable of drawing you into their stories.  As fabulous as the plot was in and of itself, the characters were what drew me in and kept me there!

Next up in the series is The Lost Concerto, which I will most definitely be reading!  It comes out in October of 2011.

Sandra Miller is an author. She’s that girl you knew in school who always had a notebook in one hand and a pen in the other, and spent every spare second experimenting with ways to put them together.

She’s also a violinist who has performed with the Las Vegas Symphony Orchestra, the UNLV Symphony Orchestra, and played in the band for a Kenny Rogers show. She’s done productions of Oklahoma!, Le Nozze di Figaro, Madame Butterfly, and too many others to list. She’s been playing and teaching music for nearly thirty years.

Her poetry has appeared at Storyhouse, and one of her poems won the Grand Prize in the FictionAddiction 2002 poetry contest.

Her non-fiction articles have appeared in Writer’s Journal, Music for the Love of It, Antiques & Collecting Magazine, Writing World, Vision for Writers, and Writer’s Forum, a Writer’s Digest publication.

« Blood of Requiem
The Werecat Chronicles »