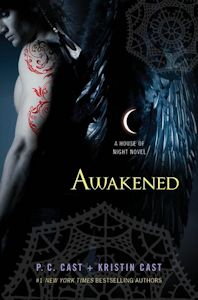 Exonerated by the Vampyre High Council and returned to her position of High Priestess at Tulsa’s House of Night, Neferet has sworn vengeance on Zoey. Dominion over her immortal consort Kalona is only one of the weapons she plans to use against Z. But Zoey has found sanctuary on the Isle of Skye and is being groomed by Queen Sgiach to take over for her there. Being Queen would be cool, wouldn’t it? Why should she return to Tulsa? After losing her human consort, Heath, she will never be the same – and her relationship with her super-hot-warrior, Stark, may never be the same either… And what about Stevie Rae and Rephaim? The Raven Mocker refuses to be used against Stevie Rae, but what choice does he have when no one in the entire world, including Zoey, would be okay with their relationship? Does he betray his father or his heart?

Awakened is the 8th novel in the House of Night series.  As the character of Zoey Redbird was the clear main character throughout most of the series, I enjoyed seeing another take the forefront in this novel.  The plot was more centered around Stevie Rae, Zoey’s best friend and a new High Priestess to the red vampyres and fledglings.  Her character became far more developed, putting Zoey in more of a supporting role. At times throughout the story, the continuing battle against Neferet and the Darkness she now commanded almost took a back seat to Stevie Rae’s story.  When that became clear to me, I was afraid that the story would begin to drag, as that battle is the center theme around which the series has been built.  I do feel that at times it was almost too focused on Stevie Rae and her struggles, leaving out a lot of the interaction between the characters that gave the previous novels depth, interest and texture.  At times, the battle with Neferet became almost an afterthought instead of a main plot point.  I don’t think these were the faults of poor writing, but rather too much attention to a single aspect of the story.  There are series in which the different novels within it will focus on a different main character, a different point of view, within the same story line.  This series has not been like that so focusing on a single aspect made the story lose just a little luster for me.  That being said, I did love the ending.  I thought I knew where it was heading, and that it would make for both a perfect ending and a perfect start for the next book.  I was totally wrong.  I like being wrong because it means it isn’t predictable.  The ending was a twist and allowed room for the next novel to explore.  And once again, the cover art is beautiful, full of symbolism that directly relates to major plot points inside. All in all, I would recommend reading it.  I may have found faults, but I definately did enjoy it. 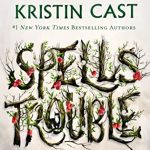