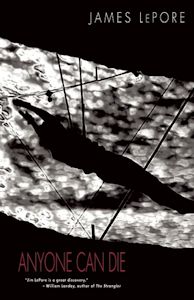 That being said, all three stories were vivid snapshots of characters that I want to know more about.  The first, Til Death Do Us Part, was the easiest to fully understand without having read A World I Never Made.  Lorrie and Pat were an interesting couple and there was a lot of action in the story.  The second story, God’s Warrior, was my favorite, although the most confusing without having read the first novel.  Megan Nolan was intriguing, clearly making decisions that shaped her future.  Although the story line was harder to follow without the backstory of A World I Never Made, the mystery of Megan and her life intrigued me.  The third and final story, Max, was definately the most disturbing, and the most sad. All in all, I enjoyed reading this and I am definately going to be buying A World I Never Made to learn more about the characters.  LePore’s writing pulls you right into the story, something you frequently don’t experience in such a short work.  It will be interesting to get the backstories of these characters and how they relate to one another in the full-length novel.

In 1999 I sold my law practice to write and take pictures full time. My photography can be seen at www.nakedeyeimages.com. In 2008, I signed a four-book contract with The Story Plant, a small, agile publisher in Stamford, Connecticut. My first novel. ‘A World I Never Made,’ was released in April of 2009; the second, ‘Blood of My Brother,’ on December 25, 2010, and the third, ‘Sons and Princes,’ in April, 2011. Reviews are on my website, or just Google me. I have also written six short stories that stand alone as pieces of short fiction, but that are meant to accompany my first two novels. The first three of these was released in February, 2011, under the title, ‘Anyone Can Die.’